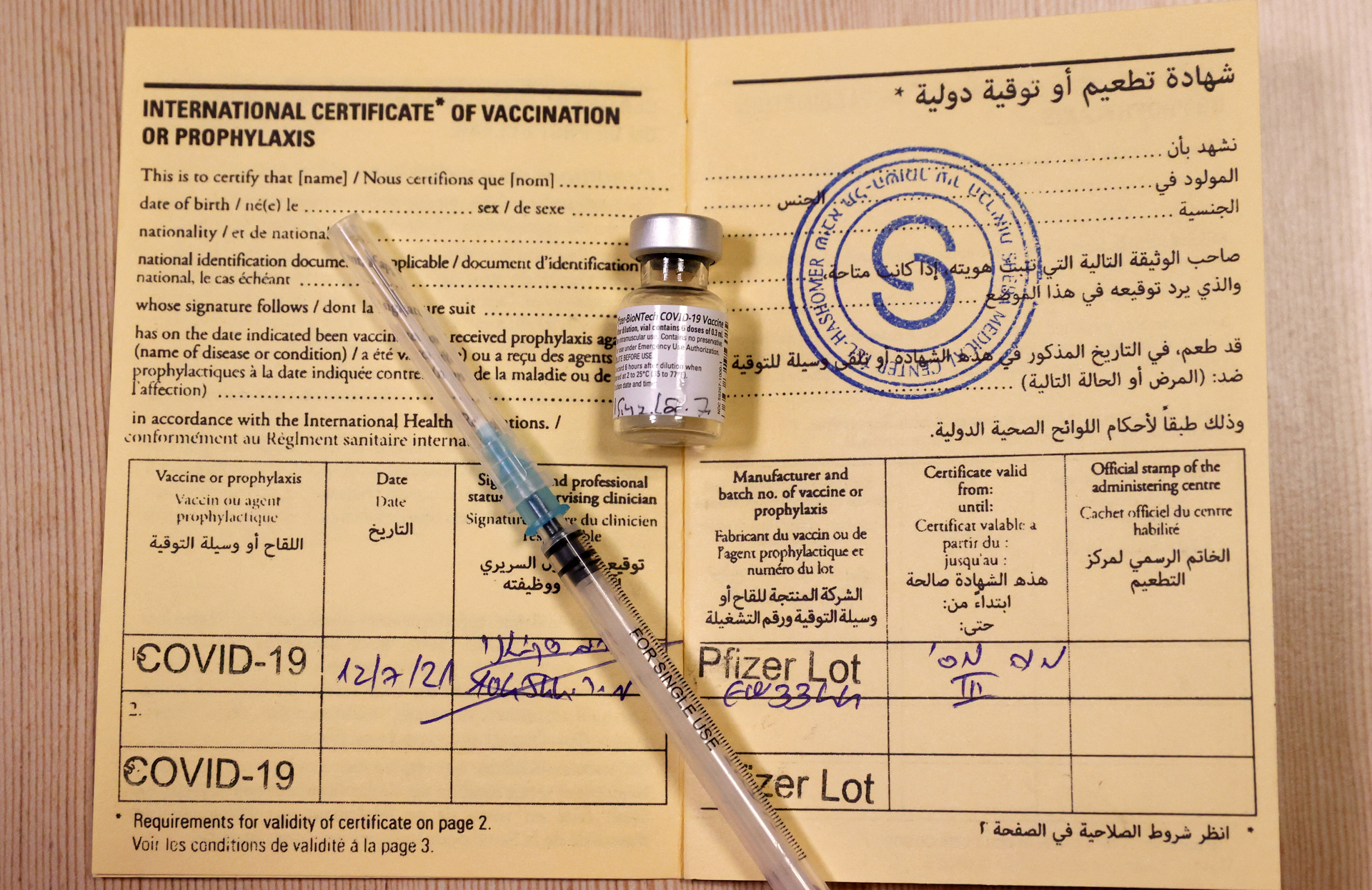 This picture taken on July 12, 2021 shows a vaccination certificate at the outpatient clinics of the Cardiovascular Centre at Sheba Medical Center near Tel Aviv, Israel ( AFP / JACK GUEZ)

A peer-reviewed study that spread on social media claims Covid-19 shots are dangerous and governments should rethink their vaccination campaigns. But the scientific paper used a flawed methodology and has been retracted by the journal.

A paper titled "The Safety of Covid-19 vaccinations -- we should rethink the policy" was initially published on June 24, 2021 in the scientific journal Vaccines. It can be read on MDPI, an online publishing platform for unrestricted access to peer-reviewed journals.

Figures including Robert Malone, a physician who has been vocal in the media about the potential dangers of the Covid-19 vaccination, and Toronto lawyer Rocco Galati, known for representing health freedom groups in lawsuits, were among those spreading the paper on social media.

Malone, who conducted research on the messenger ribonucleic acid (mRNA) technology 30 years ago, said the study concluded that for every three deaths prevented by Covid-19 shots, the jabs had caused two deaths.

A screenshot taken on June 28, 2021 shows an archived version of a tweet that is no longer available

But it was retracted, and Malone's tweet is no longer available.

In its retraction note, the journal said: "The article was evaluated by the Editor-in-Chief with the support of several Editorial Board Members. They found that the article contained several errors that fundamentally affect the interpretation of the findings."

The authors of the study had used a metric called the "number needed to vaccinate" or NNTV, based on an Israeli database. They then compared the NNTV with the number of adverse events reported after vaccination, filed to the Dutch national safety reporting database -- a database similar to the Vaccine Adverse Event Reporting System (VAERS) in the United States.

It said that the "lack of clear benefit" from the Covid-19 shot should push governments to rethink their vaccination policies.

The journal says the study used the Dutch data inaccurately.

Eugene van Puijenbroek, head of science and research at the Netherlands Pharmacovigilance Centre Lareb (Lareb) -- the Dutch database used in the paper -- agreed, saying: "The data as mentioned on our website were interpreted incorrectly and therefore led to erroneous conclusions."

"The obvious incorrect and misleading use of our data was the reason for us to contact the editorial office of Vaccines to ask for withdrawal of the article," he told AFP.

Lareb is responsible for maintaining the national database for the reporting of adverse drug reactions in the Netherlands, including adverse events potentially linked to the Covid-19 vaccines. But in its reports, the Dutch database does not draw a direct connection between the deaths post-vaccination and the vaccination itself, van Puijenbroek said.

"In fact, our analyses showed that in cases in which fatality has been reported, existing health problems turned out to be the most obvious explanation for the fatal outcomes in the majority of cases," he said.

"We explicitly ask reporters, either healthcare professionals or the general public to report suspicions of adverse events," but a causal relation between a particular health incident and the reported drug or vaccine is not needed for a report to be filed, van Puijenbroek added.

As of July 12, at least two members of the board of Vaccines have resigned following the publication of the paper.

Katie Ewer, an associate professor and senior immunologist at the Jenner Institute at the University of Oxford, resigned on June 27.

"I had no role in the publication" of the paper, she told AFP, but after reading about the study on social media, Ewer decided to look into how it had been peer-reviewed.

She said that neither the academic editor nor the only reviewer who was not anonymous were vaccine specialists, and also highlighted major problems with the study and its methodology.

"It should have been recognized that this paper would have a big impact, given the conclusions that it (incorrectly) draws," Ewer said.

"That no one at the journal picked up on that and realized that the data were going to be subjected to intense scrutiny and attention is very worrying, especially for a journal dedicated to vaccines, and that's why I felt resignation was my only option."

Florian Krammer, professor at the Department of Microbiology at Icahn School of Medicine at Mount Sinai, also resigned from Vaccines' board after the publication of the paper in the journal.

"I was made aware of the paper yesterday, read it, sent an email to the editorial staff... and then resigned from my role at the journal," he tweeted on June 26.

AFP has addressed the misuse of similar databases that record adverse events in previous fact checks, including here and here.