A Facebook page has advertised several traineeships and job opportunities with the South African Police Service (SAPS). But this is a hoax: AFP Fact Check found that the advertisements were published on an impostor page. Furthermore, SAPS confirmed to AFP Fact Check that it is not advertising any jobs at the moment. 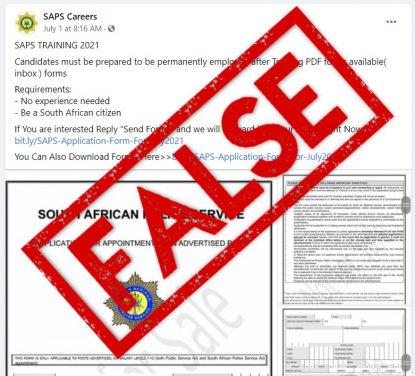 The post asks applicants to submit documents through an online form and instructs those who are unable to apply through the link to send a direct message to the page for further instructions.

On June 21, 2021, the page also published another post here claiming that SAPS is recruiting volunteers and police reservists. 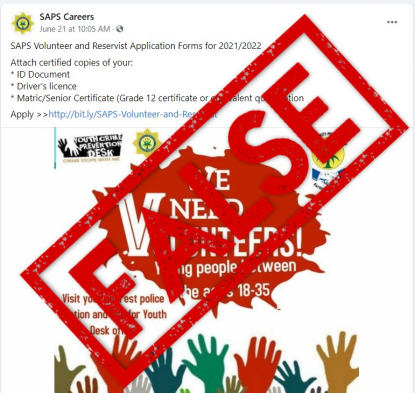 But the adverts are not legitimate.

SAPS confirmed to AFP Fact Check that it has no association with the “SAPS Careers” page and added that it has not advertised for the positions in question.

“Kindly be informed that we have not advertised any jobs through Facebook. All new jobs with the police department have been suspended till further notice due to Covid-19,” a SAPS representative told AFP Fact Check.

According to Facebook’s page transparency information, the impostor Facebook account was created on May 2, 2021, and is listed as a “musician/band”. 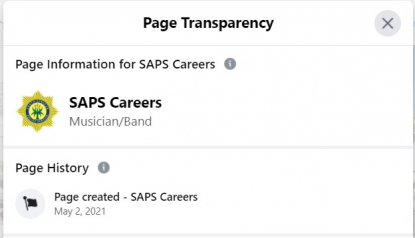 AFP Fact Check has previously debunked an almost identical claim shared on a different Facebook page as well as multiple other job hoaxes in South Africa, for example here and here.

Job scams on the increase amid high unemployment

As reported by AFP, South Africa's unemployment rate reached a record 32.8 percent in the first quarter of 2021, the highest figure since the start of the country’s labour force survey in 2008.

Both Africa Check and GroundUp have recently published reports detailing how scammers are preying on unemployed South Africans. The reports reveal that social media platforms are littered with pages advertising jobs that do not exist.

Often, the scammers ask for registration or application fees from job seekers. Alternatively, they ask them to share posts to make these posts go viral. The scammers earn money through Google AdSense, which monetizes posts with high engagement.