Image shows an underwater sculpture, not a human-shaped rock in the Pacific Ocean

An image shared more than 100,000 times on Facebook is circulating alongside the claim that it shows a rock in the Pacific Ocean shaped like a man who is praying. This is false; the image shows a submerged sculpture, one of many like it, that forms part of a large marine park in Mexico.

The image was posted on Facebook here and here several months apart in 2017, both times with the claim that scientists had found a “big rock” in the Pacific Ocean shaped like a man praying.

“This another proof that Islaam is the true religion (sic),” reads the last part of the caption. 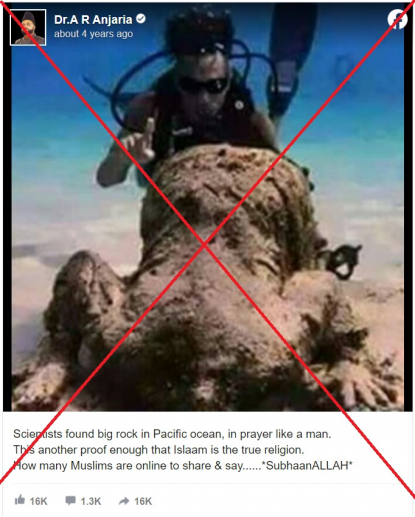 A screenshot taken on July 6, 2021, showing one of the false posts

The image shows a scuba diver posing for a photograph behind what appears to be an underwater rock formation, resembling a man down on his hands and knees.

While old, both posts continue to be shared on social media, with at least one of them circulating recently in Nigeria. The claim about the image, however, is false.

A reverse image search revealed that the picture was taken at the Cancún Underwater Museum of Art (Museo Subacuático de Arte) in Mexico, a conservation-minded project where tourists can dive among submerged sculptures.

The image in the post shows a sculpture called “The Banker”, which forms part of a series created by British sculptor, photographer and environmentalist Jason deCaires Taylor.

“The Bankers are a symbol of how little we look to the future and how we are focused on short-term gain,” Taylor writes on his website. “Each sculpture is in prayer position to show that monetary items have replaced his god.”

During a TED talk in 2016, Taylor said The Bankers was his most shared piece of art, which he hoped would get people thinking more about the health of the oceans.

“What I really hope is that people are beginning to understand that when we think of the environment and the destruction of nature, that we need to start thinking about our oceans, too.”

Numerous other works by Taylor have been installed around the world, including locations in the Pacific Ocean. AFP Fact Check debunked a previous claim about Taylor's art.