The photo shows a giant Galapagos tortoise in Australia, not Guinness record-holder “Jonathan the Tortoise”

A photo showing a giant tortoise has been shared on Facebook hundreds of times in Zimbabwe alongside a claim that it shows Jonathan the Tortoise from the island of Saint Helena  -- the world’s oldest known land animal, according to the Guinness Book of World Records. But the claim is false: the picture shows a giant Galapagos tortoise at a zoo in Australia, whose representatives say she is in her fifties -- far from reaching any record.

The photo was published here on Facebook on June 16, 2021, and has since been shared over 450 times. 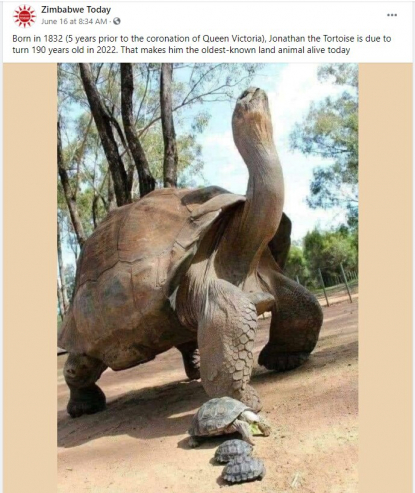 “Born in 1832 (5 years prior to the coronation of Queen Victoria), Jonathan the Tortoise is due to turn 190 years old in 2022. That makes him the oldest-known land animal alive today,” reads the post’s caption.

Who is Jonathan the Tortoise?

Jonathan the Tortoise is from the British island of Saint Helena and is said to be the oldest living land animal. According to the Guinness Book of World Records’ last update in 2019, he was believed to be 187 years old at the time, which would make him 189 years old today.

AFP ran a video story about Jonathan the Tortoise in 2017.

But the photo shared on Facebook shows a different turtle halfway across the world.

By conducting a reverse image search, AFP Fact Check found that the photo was published in May 2014 on the ZooBorns website, which records animal births in zoos across Australia. The picture, credited to the Taronga Western Plains Zoo, shows a Galapagos Giant Tortoise at the Australian zoo.

According to National Geographic, the Galapagos Giant Tortoise is the largest tortoise species in the world, measuring up to 1.5 metres long.

At the time, a spokeswoman for Taronga Western Plains Zoo confirmed to AFP Fact Check that the animal in the photo is a Galapagos tortoise known as ‘A11’, who is in her fifties and living in a zoo -- a far cry from Jonathan the Tortoise’s advanced age.