Posts shared thousands of times on social media say California told its residents not to charge their electric cars because of a power shortage. This is false; the state has released voluntary energy saving tips that include charging vehicles before an electricity conservation alert is issued, and a spokeswoman for the grid operator denied people were forbidden from charging.

“CALIFORNIA literally just told everyone to not charge their electric cars Due to power shortage,” a June 18, 2021 Facebook post read during a heat wave which sent temperatures soaring past 100 degrees Fahrenheit on some days, posing threats of energy shortages. 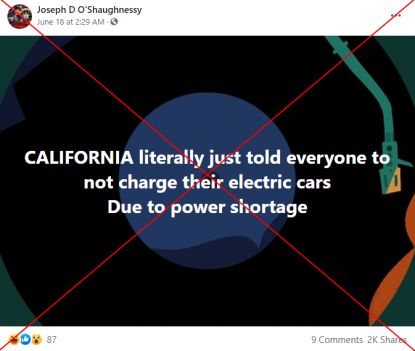 “So much for those green energy vehicles. California is asking us to conserve energy and strain on our power grid. No charging electric cars,” a social media user commented in a June 18 tweet.

“There is no truth in that statement,” Lindsay Buckley, director of communications and external affairs at the California Energy Commission, the state’s energy policy agency, said of the claim.

Much of the western United States suffered a record heat wave in June, with approximately 50 million Americans placed on alert on June 15 for "excessive" temperatures, approaching 120 degrees Fahrenheit in some areas.

These called on residents to voluntarily conserve energy at selected times including during peak hours of consumption. Alerts were sent state-wide on June 17 and June 18, coinciding with when the social media claims about the electric vehicles started spreading.

Anne Gonzales, senior public information officer at ISO, told AFP that they “have encouraged consumers to charge EVs (electric vehicles) before a Flex Alert begins. We do not say anything about ‘not charging’ in our messaging.”

On June 17, California ISO also posted advice on what to do before and during a Flex Alert. The organization recommended charging battery powered cars prior to its start. 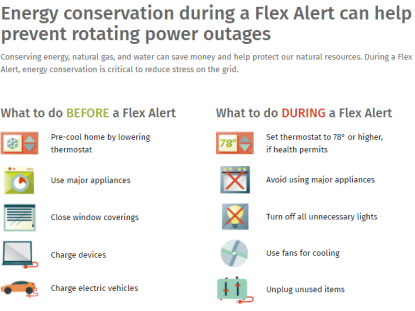 The website dedicated to these energy saving tips recommends that people avoid charging electric and plug-in hybrid vehicles during an alert, and to charge them overnight instead.

Buckley, of the Energy Commission, confirmed to AFP that Flex Alerts “are fully voluntary, and the program's messaging emphasizes shifting energy consumption -- not sacrificing.”

Gil Tal, director of the Plug-in Hybrid & Electric Vehicle Research Center of the Institute of Transportation Studies at the University of California, Davis, told AFP that “Flex Alerts ask the public not to charge electric vehicles during the alert, which is usually 6:00 pm-9:00 pm or 5:00 pm-10:00 pm at the most.”

Most drivers don’t replenish their vehicle batteries during those times anyway, Tal said.

Electric vehicle drivers “usually charge at home and can use a timer to start charging after midnight or at work during the day. Very few actually charge during those (peak) hours and even fewer need to charge at that time,” he explained.

He added that electric cars’ improved battery life generally only requires a charge every few days.

As Californians rely heavily on motor vehicles, the transport sector accounts for about half of the state's greenhouse gas emissions.

In September 2020, the office of Governor Gavin Newsom ordered that all new passenger vehicles sold in the state by 2035 should be zero-emission under a new rule aimed at fighting climate change and smog-fouled air.