How Google Maps images show that this truck overturned in Brazil, not South Africa

A post shared more than 1,300 times on Facebook claims that South African thieves refrained from looting this overturned truck, because it contained coffins. The claim is false -- a reverse image search and close comparisons with images from Google Maps confirm that the truck accident took place in Brazil, on a notorious stretch of road known in Portuguese as the “death curve”.

The Facebook post, which we’ve archived here, shares pictures of the overturned truck on a scenic road. A closer look through the damaged truck door shows some coffins inside.

The caption reads: “There is Hope for South Africa , This truck rolled and nothing was stolen from it.” 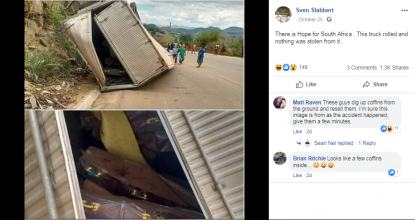 Though looting in South Africa has made international headlines in recent months, a reverse image search on TinEye quickly shows the images are from an accident in Espírito Santo, a state in southeastern Brazil, in April 2017.

Local reports here and here describe in Portuguese how a truck loaded with coffins toppled over on the afternoon of April 10, 2017. The accident happened on a stretch of highway called ES-164, which connects Cachoeiro to Vargem Alta.

The reports and many more articles online speak about the numerous lives the stretch has claimed, describing it as the Curva da Morte, or “death curve” in English. 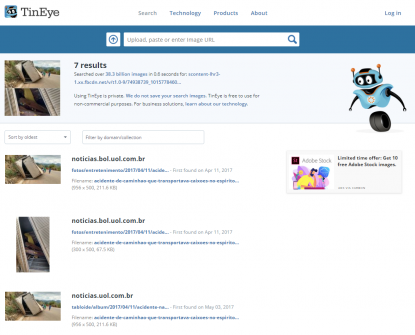 A screenshot taken on October 28, 2019 of the reverse image search results on TinEye

AFP Fact Check confirmed the location of the accident using Google Maps Street View, marking the distinctive shape of the silhouette of the mountains in the horizon, the electrical lines on the right side of the road, and the rocky wall on the left rising over a sidewalk. 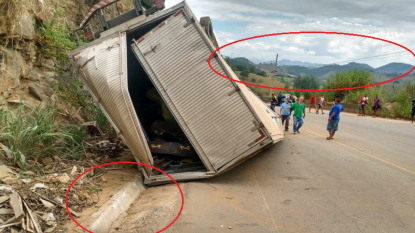 A screenshot taken on November 4, 2019 of the "death curve" on ES-164 verifying the location of the accident

To confirm that we had correctly located the “death curve” on Google Maps, we also compared Street View images from the opposite direction to a 2015 local news video report about another accident on this stretch of highway.

From the other direction on Street View, you can see big towering mountains — and the same ones in the video. So we can be sure that this is indeed the deadly stretch of the ES-164. 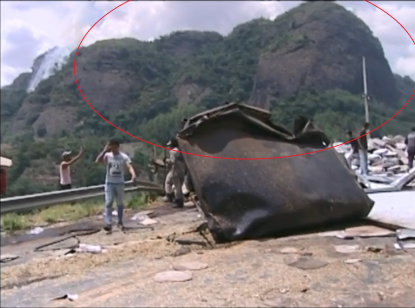 The opposite angle for the "death road" found on g1.globo.com dated January 27, 2015 ... the same towering mountain can be seen here too on Google Street View

Earlier this year officials said they would be writing to Espírito Santo’s director general of highways, Luiz Cesar Maretto, urging safety improvements for the road before it claimed more victims.

However, this past weekend local news outlets reported that a bus accident there had claimed at least four lives, two of them children. 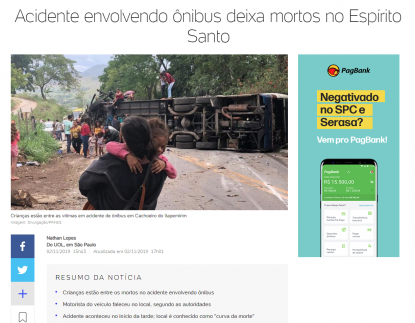 A screenshot taken on November 4, 2019 of a recent "death curve" article in Portuguese

This video shows a Sri Lankan ruling party MP referring to the national anthem, but he did not suggest singing it in Arabic