False claims about Hong Kong's recent district elections were shared thousands of times on Facebook and Twitter. One prominent hoax claimed the elections were due to be staged on November 25, not November 24. Another hoax falsely claimed voters could select more than one pro-government candidates. Some social media posts even urged voters to write additional notes of support for candidates on their ballot sheets, which risked making their vote invalid. Despite the disinformation, the elections saw a record turnout and huge gains for pro-democracy candidates.

The posts were circulating online ahead of Hong Kong’s district council elections, which saw pro-democracy candidates win an overwhelming majority of 452 elected seats in the city’s 18 district councils.

Here is an AFP report about the elections, which were held during the sixth consecutive month of unrest in the semi-autonomous territory.

The election results were published here on the official election website.

One misleading post was published here on Facebook on November 22, 2019. It has been shared more than 2,500 times.

The post wrongly suggests the elections were due to be held on November 25, not November 24. 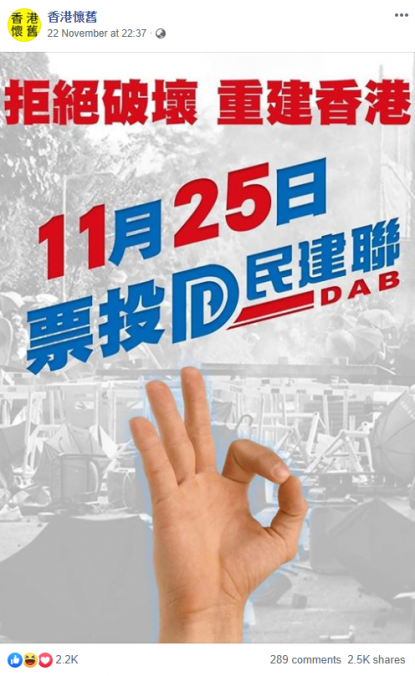 Translated from traditional Chinese to English, the red text on the image says: “Stop destruction, rebuild Hong Kong". Words underneath it state: "November 25, vote for DAB".

The DAB, or Democratic Alliance for the Betterment and Progress of Hong Kong, is a pro-Beijing political party in the city.

Another image published here on Facebook on November 22 also falsely claimed the elections would be held on two separate days for supporters of the pro-Beijing and pro-democracy blocs. 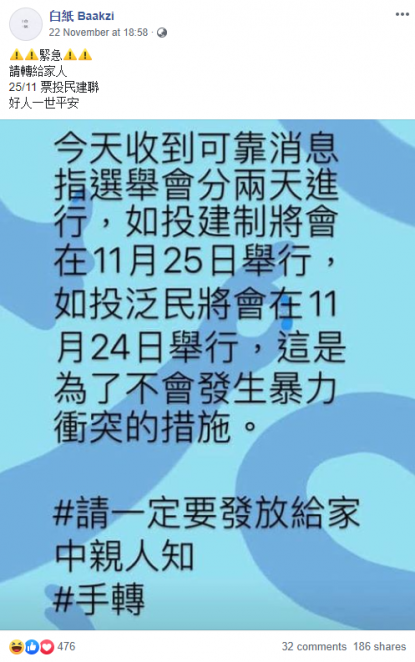 The traditional Chinese-language text on the image translates to English as: “Today, reliable news about the two-day elections had arrived. November 25 is for those voting for the pro-establishment camp, and November 24 for supporters of the pro-democracy camp. This measure is implemented to avoid violent clashes.
#PleaseMakeSuretoSendThistoFamilyMembers
#ShareasYouSee”.

The post’s caption translates to English as: “Emergency
Please share with your family members
25/11 vote for DAB
Good people will have rich blessings”.

The same image was also published here on Facebook with a similar claim.

A third image of a purported ballot sheet was published here on Facebook on November 21, 2019, encouraging voters to vote for more than one candidate in the elections.

The post’s traditional Chinese-language caption translates to English as: “Vote for multiple pro-establishment candidates. If one fails, another can still make up for it
Turn one vote into three, greatly increase our chances to kick the yellow ribbons out
“#SupportProEstablishment #SaveLivelihood
“PeacefulHongKong #ComingSoon”.

The blue text on the image translates to English as: “Vote multiple times on one ballot paper, stop violence and chaos!" At the bottom of it, a message alongside a thumbs-up sign states: "Work together and kick pro-democracy candidates out of the council". The image shows a red cross over the box for the pro-democracy party Alliance for True Democracy.

The three boxes beneath it are assigned for pro-Beijing groups the DAB, Hong Kong Federation of Trade Unions and New People's Party, and the purported candidates' names were replaced with: “Protect society”; “Cherish homeland” and “Admire police”. A red arrow has been placed next to each "candidate"’s name, and a red tick in each of the parties' boxes.

The same image was also published here on Facebook. It received more than 2,000 shares.

A fourth misleading image was published here on Facebook with a message that says: “Share quickly”. It has been shared more than 740 times. The image’s simplified Chinese-language text translates to English as: “Ignore the pro-democracy candidates during the elections, all in all, when voting for the pro-establishment heroes, remember to write 'add oil' or 'support' on the ballot paper after stamping it to cheer for the pro-establishment camp! And you should choose more than one pro-Beijing candidates! Make sure they are all elected!

The same image also appeared here on Facebook with a similar claim.

All of the claims in the misleading posts are false.

The voting regulations state in part: “Vote for ONE candidate only on the ballot paper.

“You must use the chop provided. Do NOT use a pen or any other means to mark or amend your ballot paper. This will render your vote invalid.”

Below is a screenshot of the voting instructions: 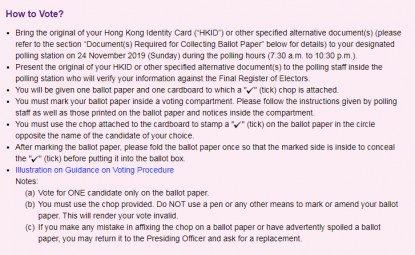 Screenshot of the voting instructions

"Regarding new reports of internet disinformation to deter voting, underhand tactics are regularly part of Hong Kong's elections and it is vital that the electoral process is cleaned up,” he said. “However, these legitimate concerns should not be allowed to distract from what was an unequivocally emphatic result on November 24 with an unprecedented high turnout despite this disinformation. This results give a clear statement that Hong Kong's silent majority are behind democratic reforms and the introduction of an independent inquiry.”