A photo of hundreds of people praying has been shared thousands of times in multiple Facebook and Twitter posts alongside a claim it shows Muslims praying at Babri Masjid, a mosque at a disputed religious site in north India. The claim adds that the worshipers were offering a final prayer following a ruling earlier this month by India’s top court that approved the construction of a Hindu temple on the holy site. The claim is false; the photo shows Muslims praying on Eid al-Adha in 2008 at the Feroz Shah Kotla mosque in New Delhi.

The photo was published here on Facebook on November 12, 2019. The post’s Urdu-language caption translates to English as: "Last prayers at the site of the demolished Babri Masjid in Ayodhya before it is handed over to the Hindus."

Babri Masjid, or the Babri mosque, refers to the 16th century mosque that has been at the center of deadly religious strife in Ayodhya, a town in the north Indian state of Uttar Pradesh. The mosque was destroyed by Hindus in 1992 over claims that it was built on the birthplace Rama, a Hindu god, and a previously demolished Hindu temple. Thousands of people, mostly Muslims, were killed in the subsequent unrest across India, AFP reported here.

On November 9, 2019, India’s Supreme Court issued a decision in a long-running ownership dispute over the contested religious site. Here is an AFP report on the court’s ruling, which awarded Hindus control over the site. 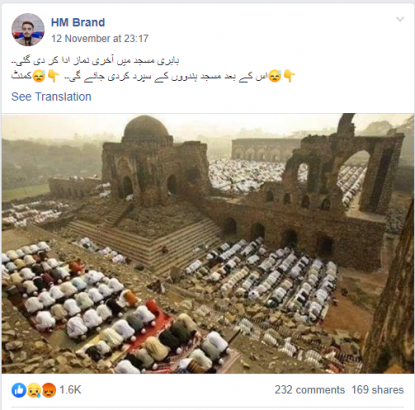 The claim is false; the photo shows Muslims praying on Eid al-Adha in 2008 at Feroz Shah Kotla, a 14th century mosque in India’s capital New Delhi.

A reverse image search on Google found the same photo was published here on December 12, 2018. It was shared alongside several other archived photos of prayers from across the world to mark the festival.

Below is a screenshot of the original photo, which is credited to Associated Press photographer Gurinder Osan: 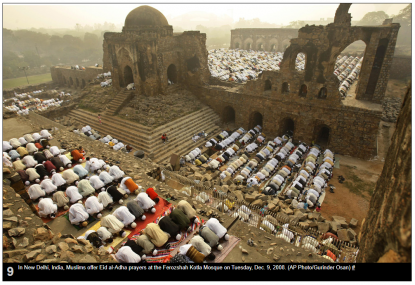 A Google user's photo of the same mosque tagged at the mosque's location here on Google Street View  corresponds with the photo in the misleading Facebook post. Below is  a screenshot comparison of the two images: 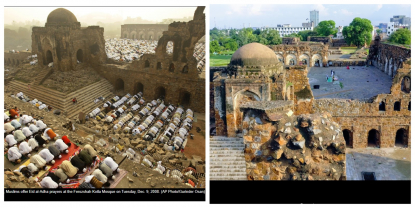 Several other photos of the Feroz Shah Kotla mosque published by Getty Images can be seen here.