Four photos have been shared thousands of times in multiple Facebook posts which claims they show damage caused by two earthquakes which struck the Thai-Laos border on November 21, 2019. The claim is misleading; two of the photos in the post have circulated online since August in reports about landslides in Laos’ Huaphan province; the other two photos have circulated in media reports about the November earthquake.

The photos were published here in a Facebook post on November 21. It has been shared more than 10,000 times.

The post includes four photos: one of a partially collapsed green house, one of a structure that has collapsed and slid into a river, and two close-up photos of cracked and damaged structures. The post’s Thai-language caption translates to English as: “The effect of people who live around Xayaburi dam in Laos. The epicentre of the 5.9 magnitude quake. This morning (November 21, 2019) at 6.50 AM”.

The photos were also published here on Facebook with a similar claim.

The claim is misleading; two photos in the post were published online in August in reports about damage caused by landslides Huaphan, a province in northeastern Laos, in August 2019.

A reverse image search on Google found that the first photo of the collapsed green house was published here by InsideLaos, a Laos-based community news site, in its August 5 report on the landslides in Huaphan. Part of the Laos-language report translates to English as: "[The storm] has caused severe flooding and landslides in several villages in Huaphan and Luang Prabang provinces. At least 11 people have been confirmed missing.”

The landslides in Huaphan were also reported on here by the Vientiane Times, an English language Laos-based news site. The article’s first paragraph reads: “Heavy rain has affected the area since August 3 and seven people are still missing after a landslide.”

Another reverse image search for the misleading post’s second photo found this high-quality YouTube video that was published on August 16, 2019.

The video’s caption reads: “In Laos, the house on the banks of the lake has become horrendous.” 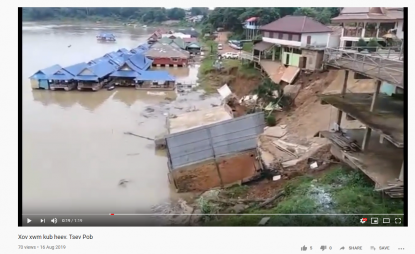 Reverse image searches for the other two photos in the misleading post found the images in media reports about the November 21 earthquakes.

Both images appear in this report published by M2F, a Thai-language tabloid on November 21, 2019. 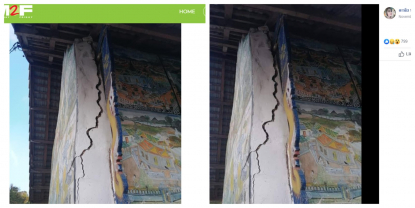 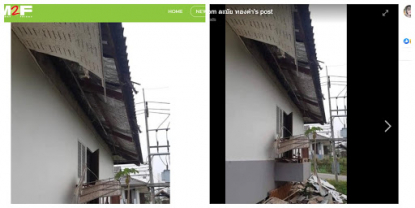