Skip to main content
Former US secretary of state Henry Kissinger arriving for an event at the White House on April 24, 2018 (Mandel Ngan / AFP)

Facebook posts shared tens of thousands of times attribute flattering comments about President Donald Trump to former US secretary of state Henry Kissinger. The remarks are fabricated; his office described them as “inventions,” and there is no record that he made them.

The posts -- here, here and here -- misleadingly combine false quotes with actual remarks made by Kissinger, who remains an important, if controversial, figure on foreign policy matters. 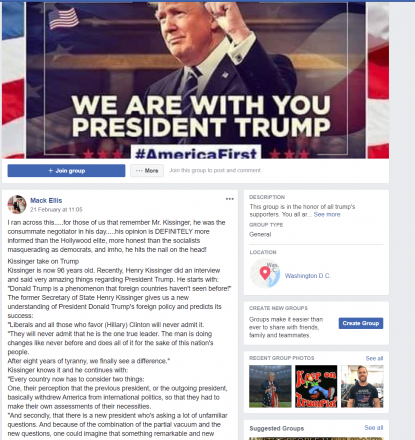 The wording has been altered by different users, as has Kissinger’s age. He is 96, but some posts claim he is 95.

It also criticizes the presidency of Barack Obama: "After eight years of tyranny, we finally see a difference.”

The post then goes to an overtly flattering quote about the US president, again attributing it to Kissinger: “Trump puts America and its people first. This is why people love him and this is why he will remain in charge for so long. There is not a single thing wrong with him and people need to open their eyes.”

Some of the Facebook posts directly quote Kissinger, who served under presidents Richard Nixon and Gerald Ford, though others cite the remarks as reported speech. 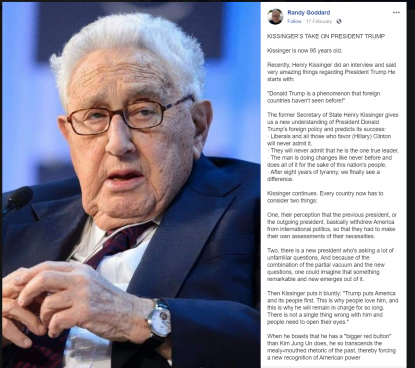 None of those statements were made by Kissinger, according to Courtney Glick, an assistant to the German-born former US diplomat, who was national security advisor prior to becoming secretary of state, a role he held until 1977.

Glick, of the Kissinger Associates consulting firm, told AFP in an email: “I had the opportunity to speak with him about this further and he asked me to confirm with you that the comments you defined as suspicious are inventions, and they should be removed from Facebook.”

The genuine remarks by Kissinger were made in a television interview that took place in December 2016, a month after Trump’s election victory but before he took office.

The veteran diplomat gives credit to Trump for securing a shock victory over Democrat Hillary Clinton and, starting at the 5:07 minute mark, assesses what might happen during a Trump presidency.