A video has been viewed tens of thousands of times in multiple Facebook, Twitter and YouTube posts which claim it shows a suspected coronavirus case in China being detained by officials after he failed a body temperature test and attempted to force his way through a blockade. The video has been shared in a misleading context; it shows a police drill at a toll gate in China's Henan province during the novel coronavirus epidemic.

The footage shows a man, who can be seen wearing a face mask, attempting to escape at a blockade after being approached by two personnel wearing uniforms for China’s Unit of Special and Tactical Weapons (SWAT). As he gets out of the car, the man removes his face mask and is arrested. Mandarin language can be heard throughout the footage, which partly translates "Unusual body temperature, abnormal situation"; "I'm not sick".

The video’s caption states: “#coronarvirusitalia #coronavirus A man with a fever tries to force the blockade post of the Chinese authorities”. 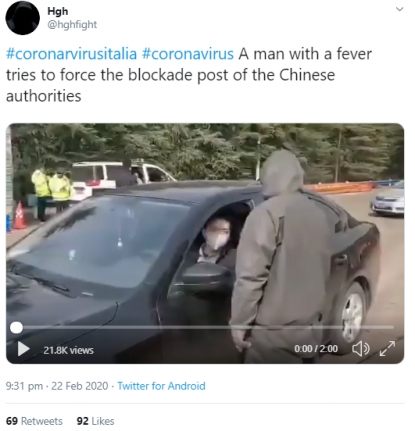 The video was also shared here on YouTube and here on Facebook with a similar claim in English.

The video has been shared in a misleading context; it shows a police drill in China during the novel coronavirus epidemic.

Below are two screenshots of the signboard:

Screenshots of the signboard

AFP Fact Check’s Spanish-language team found this YouTube video containing part of the footage in the misleading post, plus some additional footage.

At the one-second mark, it shows a toll gate in the distance on which simplified Chinese text translates to English as “Tongbai East Station”.

Below is a screenshot which shows the toll gate: 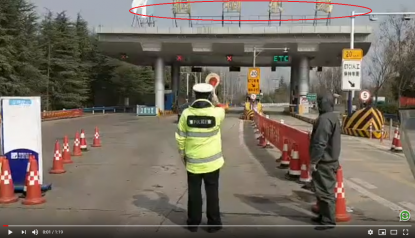 Screenshot which shows the toll gate

A keyword search on Chinese blogging site Weibo found this video published by the Traffic Management Bureau of the Ministry of Public Security in China on February 23, 2020.

The Weibo post’s simplified Chinese-language caption translates to English as: “[Refuse to cooperate with epidemic prevention inspection? Henan Tongbai police conducted hard core drill] On February 21, regarding the current emergency treatment situation when preventing and controlling the epidemic, police in Tongbai, Henan held a simulated emergency response and disposal drill during epidemic prevention and control time at Tongbai East Station on S49 Jiaotong Expressway, quickly controlling a driver with an abnormal temperature and who tried to crash the gate. #TrafficPoliceReminded: During the epidemic prevention and control period, please cooperate with the anti-epidemic inspections and contribute your efforts to win the anti-epidemic war.”

The footage corresponds with the video in the misleading posts from its nine-second mark, but subtitles have been added.

Below are two comparisons of the video in the misleading posts (L) and the Weibo video (R): 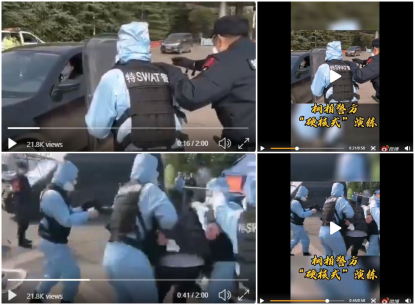 The Weibo video also corresponds with parts of the longer YouTube video from the beginning to its 57-second mark.

Below is a screenshot comparison of the YouTube video (L) and the Weibo video (R):

The location where the footage was filmed can be seen here on Google Maps near Tongbai East Toll Gate.

A February 16, 2020 article published by the Public Security Bureau of Tongbai on its official WeChat account here shows images of the same toll gate.

Below is a screenshot comparison of the YouTube video (L) and the article (R):

Screenshot comparison of the YouTube video (L) and the article (R)