This hacker stole billions to fund his ‘luxurious’ lifestyle, not to donate to the poor

A meme claims that jailed Algerian hacker Hamza Bendelladj stole billions of dollars from hundreds of banks and donated them to poor African countries and Palestine. But there is no evidence that Bendelladj, who was found guilty of helping to create a virus designed to steal confidential information, spent his money on those less fortunate. Following his 2013 arrest in Bangkok, police there said the hacker admitted to using the funds to fuel his lavish lifestyle. The meme also misleadingly implies that he was imprisoned in Thailand when he was in fact extradited from there to the United States and then sentenced to 15 years in jail.

“An Algerian hacker who extracted $4 billion from 217 different banks and donated it all to poor African countries and Palestine,” the misleading text in the meme reads.

It continues: “He was arrested in Bangkok and sentenced to 15 years in prison with a smile.” 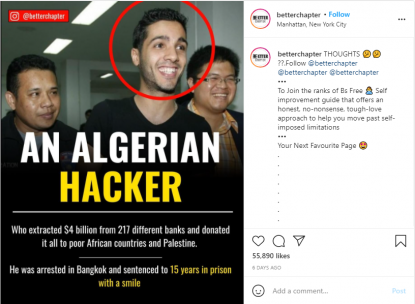 The claim can be found in various posts and memes including here.

Bendelladj was dubbed the “happy hacker” after photographs of his 2013 arrest at a Bangkok airport showed him smiling while being led away in handcuffs. AFP covered his detention and extradition here. 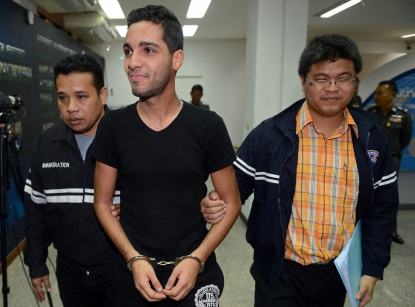 A US federal grand jury indicted Bendelladj, also known as Bx1, on 23 counts including conspiring to commit computer, wire, and bank frauds, the FBI said in a press statement at the time.

He was accused of participating in the development, sale, and distribution of the "SpyEye" virus, which allowed access to computers and the stealing of personal and financial information.

Bendelladj pleaded guilty in 2015 and was sentenced to 15 years in prison a year later.

According to the US justice department, Bendelladj stole "hundreds of thousands of credit card and bank account numbers, causing millions of dollars in losses to individuals and financial institutions around the world".

US authorities estimate that “SpyEye” was the primary malware targeting banks between 2010 and 2012, used by “a global syndicate of cybercriminals to infect over 50 million computers, causing nearly $1 billion in financial harm to individuals and financial institutions around the globe".

Some online posts and articles have portrayed Bendelladj as a hero by claiming that he used his money to fund Palestinian charities.

The available court documents (here and here) do not give any indication of what Bendelladj did with the stolen money.

Thai police in 2013 said Bendelladj told them he had “spent it on travelling and a luxurious life like flying first class and staying in luxury places”.

AFP Fact Check has previously fact-checked claims related to the hacker here and here in French.