Skip to main content
(FILES) In this file photo former US President Donald Trump speaks to the media prior to departing from the South Lawn of the White House in Washington, DC, September 21, 2020, as he travels to Ohio. (AFP / Saul Loeb)

Footage of former US President Donald Trump has been viewed tens of thousands of times across social media platforms alongside a claim it shows him giving a defiant televised speech on January 18, 2021, two days before President Joe Biden's inauguration. The claim is false: the video in fact shows Trump addressing US troops in 2017 at an air base in Japan.

The post’s simplified Chinese-language caption translates to English as: “At 10 am EDT this morning, President Trump gave a televised speech and then put on his military uniform in public, starting to exercise the sacred duties as the commander-in-chief of the armed forces. The wartime president began to attack head-on, and the God of War came on stage!”

A White House logo can be seen superimposed in the top right-hand corner of the video. 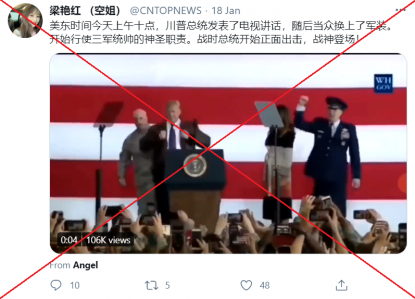 A Yandex reverse image search followed by a keyword search found the footage was published on a verified White House YouTube channel here on November 5, 2017, more than three years before date given in the misleading posts.

The clip corresponds to the YouTube video’s 36-second mark.

The YouTube video’s headline reads: “President Trump and the First Lady Participate in a Yokota Air Base Troop Event”. The caption states the video was filmed in Tokyo.

Below are screenshot comparisons of the footage shared in the video in the misleading Twitter post (L) and the 2017 White House video published on YouTube (R): 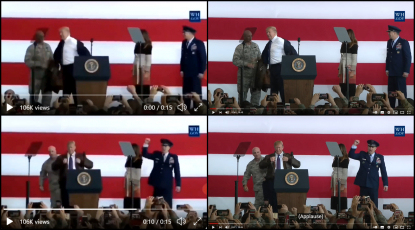 Other footage, as well as a photo from Trump's address to US troops in Japan in 2017, was also published by the US Embassy in Japan here on November 5, 2017.

AFP published this report on Trump’s speech on the same day.