A video has been viewed thousands of times on Twitter and Weibo in October 2020 alongside a claim it shows police in Azerbaijan arresting people during the country’s military conflict with Armenia in 2020. The claim is false; the video has circulated since at least 2019 in reports about anti-government protests in Azerbaijan. 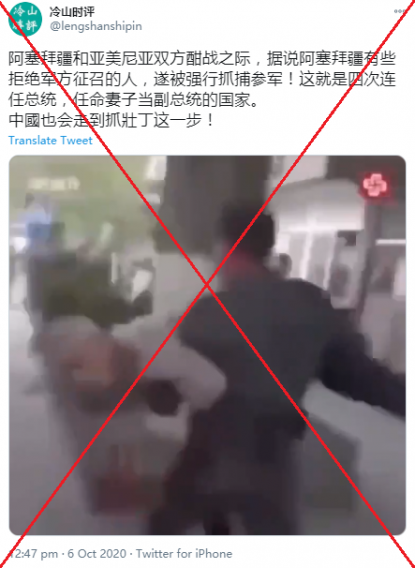 The post’s caption, written in both simplified and traditional Chinese, translates to English as: “At this moment when Azerbaijan and Armenia are at war, it is said that some people in Azerbaijan who refused to be recruited by the military were forcibly arrested to join the army! This is a country where the president has been re-elected four times and his wife has been appointed as the vice president. / China will also come to this point!”

The post circulated after military clashes erupted between Armenian and Azerbaijani in late September 2020 over the disputed Nagorno-Karabakh region, as AFP reported here.

A reverse image search based on keyframes extracted from the video found that the footage has circulated in reports since at least 2019.

The video was published here on YouTube by Meydan TV, a Berlin-based Azerbaijani news network, on October 21, 2019. The footage shared in the Twitter posts begins at the YouTube video’s 13-second mark.

The YouTube video’s Azerbaijani-language title translates as: “Images of police violence and insults to protesters”.

The caption reads: “Authorities and YAP officials claim that police did not use violence during the October 19 rally. We have collected images of violence for you during the action. Follow, decide for yourself. Share it so that it reaches the official bodies, maybe they took measures.”

YAP is an acronym for Azerbaijan's ruling New Azerbaijan Party.

The October 2019 arrests in Azerbaijan were also reported on here and here by US government-affiliated media organizations Radio Free Europe/Radio Liberty and Voice of America.