Three photos have been shared hundreds of times in multiple Facebook posts alongside a claim they show “pothole stickers” laid on roads in Canada in a bid to slow down motorists. The claim is misleading; all three photos have circulated in reports about an advertising campaign by an India-based agency since at least 2007. 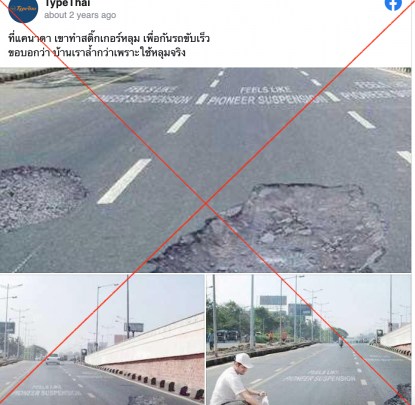 The post’s Thai-language caption translates to English as: “In Canada, they used pothole stickers to prevent people from driving fast.

“I wanna tell you that in our country, it’s better because we have real potholes.”

The post has circulated online since at least 2014, as seen here. It resurfaced here and here in 2020. Some misleading posts compare the purported photos with photos that show real potholes on the street.

However, the claim is misleading; the photos have circulated in online reports about an advertising campaign since at least December 2017.

A reverse image and keyword search on Google found all three photos published here on the website for Ads of the World, a creative advertising showcase, in June 2007.

The caption states: “Pothole Sticker - A large sticker of a pothole was laid on the road creating the illusion of real hotpole. Drivers would see it and slow down to avoid the jerk of their car but would feel nothing. The message “FEELS LIKE PIONEER SUSPENSION” was painted a few meters ahead.”

According to the article, the campaign was designed by Y&R Everest, an advertising agency based in the Indian city of Mumbai. The group merged with a US-based digital agency VML, which later became VMLY&R in September 2018.

Below are screenshot comparisons of the images in the misleading Facebook post (L) and the Ads of the World photos (R): 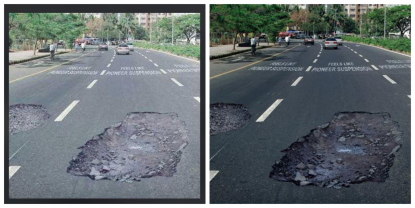 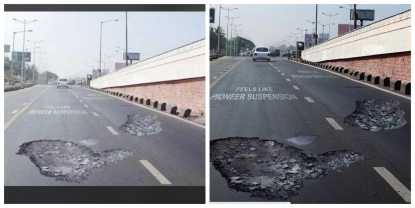 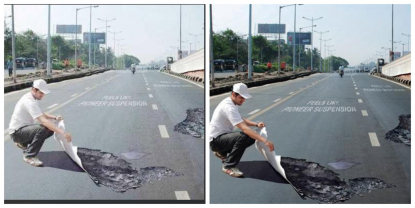 The three photos also appeared in articles about the same project on other websites of creative advertising agencies, including Adeevee here and The Perfect Media here.