A video of people watching weapons being fired has been viewed hundreds of thousands of times in Facebook, Twitter, YouTube and Weibo posts that claim it shows live gunfire between Azerbaijan and Armenia in the ongoing 2020 military conflict. The claim is false; the footage circulated in 2019 in reports about spectators at a military performance in Russia. 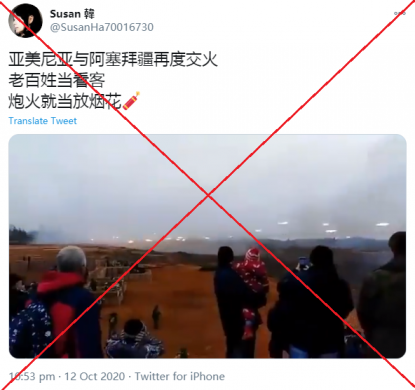 The post circulated as Armenian and Azerbaijani forces continue to clash over the disputed Nagorno-Karabakh region, as reported by AFP here.

A reverse image search of keyframes extracted from the video found that the same footage was published on YouTube here on November 17, 2019, almost a year before the hostilities between Armenia and Azerbaijan began in 2020.

The video’s Serbian headline states the video was filmed in Russia.

The same YouTube video was also embedded in this article by Russia Beyond, a Russian government-owned multilingual publication, on November 17, 2019. 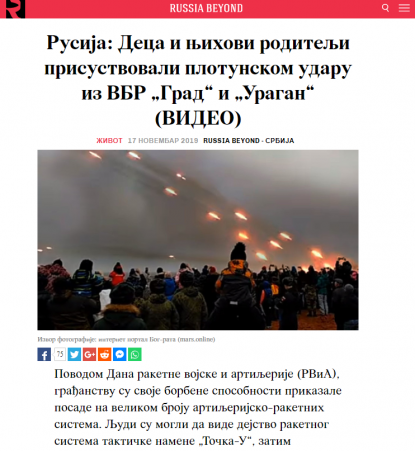 Screenshot of the Russia Beyond article

The article’s Serbian headline translates to English as: “Russia: Children and their parents attended the platoon strike from VBR ‘Grad’ and ‘Uragan’”.

The first paragraph of the article reads: “On the occasion of the Day of Missile Forces and Artillery (RViA), the crews of a large number of artillery and missile systems presented their combat capabilities to the citizens.”

The footage was also published here in November 2019 on the Arabic YouTube channel of the CCTV, a Chinese government-run media outlet.