An image purporting to show Indian Prime Minister Narendra Modi resting his chin on a woman’s foot has been shared tens of thousands of times on Facebook. The image, however, has been doctored; the image has been manipulated to include the woman's foot from a photo of Modi practicing yoga in 2015. 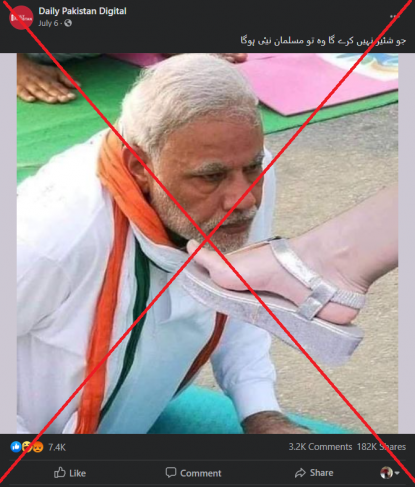 The post’s Urdu-language caption translates to English as: “Anyone who will not share this will not be a Muslim.”

The post implies the photo is authentic and suggests other Facebook users who identify as Muslim should share the image in an effort to demean Modi.

The same image was also shared alongside similar captions on Facebook here, here and here.

The image, however, has been doctored to include the woman’s foot.

Reverse image searches found the image was created from a photo of Modi during a yoga session he participated in to mark International Yoga Day in June 2015.

Photos of Modi practicing yoga in the same clothes seen in the doctored image were widely published by Indian media, for example here, here, here and here.

Footage of the entire session was also published on Modi’s official YouTube channel here. At no point does Modi touch a woman’s foot with his chin in the video.

Below is a screenshot comparison of the manipulated image (L) and a photo published by the International Business Times (R):