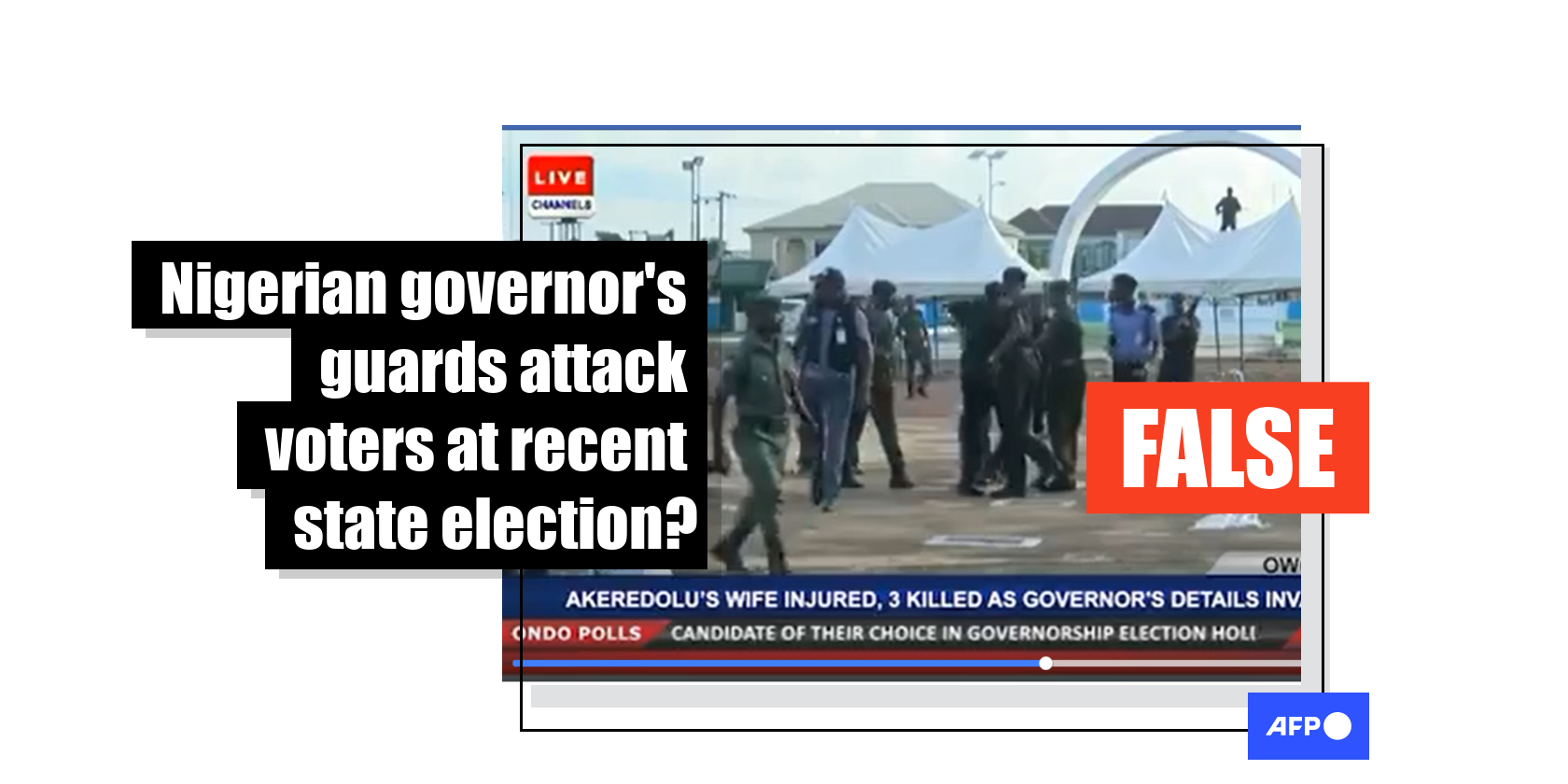 Footage of uniformed men firing gunshots to disperse a mob has been shared thousands of times on social media purporting to show violence during Nigeria’s recent election in Ondo state. However, the claim is false; the video was filmed in a different part of the country in 2018 and is unrelated to the state poll. AFP Fact Check found that the TV banner was digitally manipulated to include misleading text.

Shortly after the governor of Nigeria’s southern Ondo state, Rotimi Akeredolu, and his wife, Betty Anyanwu-Akeredolu, cast their votes during a local election on October 10, 2020, footage from a Nigerian TV station showing armed police shooting in the air surfaced on social media along with different claims.

Akeredolu contested the election under Nigeria’s ruling All Progressives Congress (APC) to secure his second term in office.

But before he was officially declared the winner on October 11, 2020, numerous online posts, including this one on Facebook with more than 122,000 views, claimed that the TV clip showed an attack on voters by Akeredolu’s security guards, leaving three people dead and his wife injured. 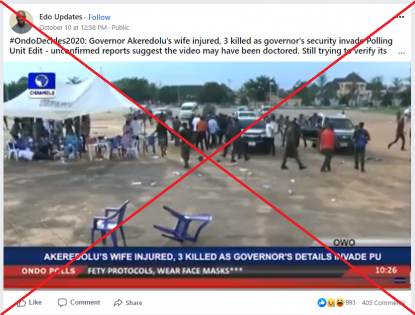 The video clip was also shared in this tweet with claims that it shows an attack by supporters of Nigeria’s main opposition People’s Democratic Party (PDP).

But the video is not recent and was taken more than two years earlier.

Using the InVID-WeVerify tool, AFP Fact Check ran several reverse image searches on keyframes of the video. We then found a longer version of the clip published on YouTube in October 2018 by Nigerian television station ChannelsTV.

The clip is the second in a series of reports shot by the network during a PDP primary election for an MP seat in Nigeria’s southern Delta state ahead of the country’s 2019 general elections.

According to ChannelsTV, violence broke out at the polling venue in the capital Asaba following an argument among party delegates, which later prompted police to fire into the air.

The text was manipulated in the versions now being shared on social media, to read: “AKEREDOLU’S WIFE INJURED, 3 KILLED AS GOVERNOR’S DETAILS INVADE PU” as well as “JEGEDE’S WIFE SHOT, OTHERS INJURED AS PDP THUGS INVADE POLLING UNIT”.

Eyitayo Jegede was PDP’s candidate in the state election. 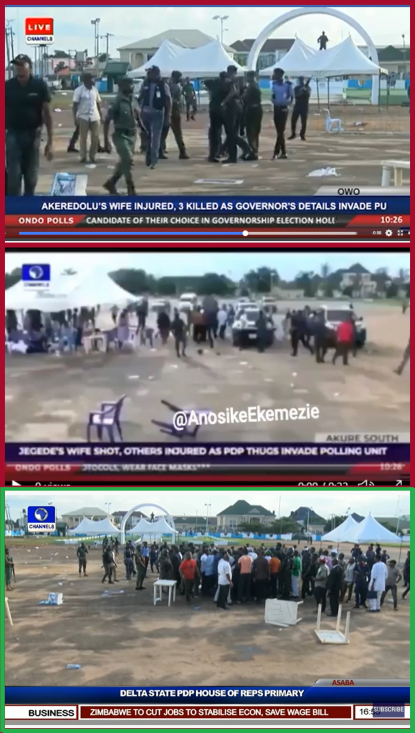 Comparison screenshots taken on October 10, 2020, show manipulated headlines (in red) and the original version (in green)

The ticker beneath the TV banner has also been changed to include a message about face masks and then another about the governorship election, though it jumps choppily from one to the other and back again.

Using Google Maps, we found a picture showing the exact location in Asaba called The Cenotaph. It serves as an event centre for special occasions, according to the state government.

Screenshot taken on October 11, 2020, showing a geotagged photo of The Cenotaph on Google Maps

Physical features in the video, including the military statue, can be seen on the Google Maps image.

ChannelsTV also spoke out against the misuse of its report.

“FAKE NEWS: The video below is doctored and is not part of Channels Television’s coverage of the Ondo 2020 Governorship Election,” reads a tweet by the TV station.

FAKE NEWS: The video below is doctored and is not part of Channels Television's coverage of the Ondo 2020 Governorship Election.

The events playing out in the video is from an incident in Delta State two years ago.

Anyanwu-Akeredolu has repeatedly dismissed the claim as untrue. “That is insane, that is absurd,” she said in an interview with Channels Television alongside her husband.

Shortly after the claim went viral, she addressed her purported injury in a Facebook video, saying “it’s all false” and that the claim shows what “distractors are trying to do to damage the exercise”.

Although there were reports of politically-fuelled clashes at some voting stations in Ondo state, no credible media organisations in Nigeria reported on violence at this particular venue.