A Facebook live stream broadcast on March 10, 2021 purports to show former US president Donald Trump arriving at a parade. The claim is misleading;  the footage in fact shows a 2017 Bastille Day parade in Paris, France, where Trump had been invited as a guest of honour by French President Emmanuel Macron.

The video shows former US president Donald Trump emerging from a car with his wife Melania.

The couple are later shown watching a military parade. 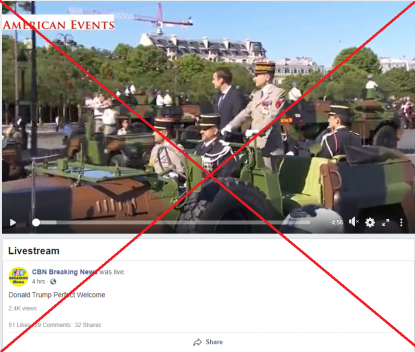 The footage was also live-streamed on this Facebook page on the same day, and posted on March 9, 2021 by a YouTube channel called ‘American Events’, where it has been viewed more than 130,000 times.

Landmarks visible in the footage, most notably the Arc de Triomphe, suggest it was filmed in Paris.

The military parade on the Champs-Elysées and planes showcasing the French tricolour flag indicates it shows a Bastille Day parade, which is held every year on July 14 to mark France’s national day. 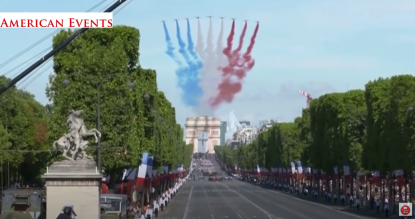 AFP ran a keyword search for “Trump Bastille Day” and found various news reports and videos of the former US president attending the celebration in Paris on July 14, 2017, where he was invited as guest of honour by French President Emmanuel Macron.

The purported livestream appears to be a combination of two videos from the parade. A keyword search of “Bastille Day 2017” on YouTube led AFP to the first section, from 0:00 to 1:51, of the misleading livestream.

The footage can be viewed here in this YouTube video published by France’s Ministry of the Armed Forces, which shows the military parade along the Champs-Elysées on July 14, 2017.

Below is a comparison between the misleading livestream (L) and the video published by the Ministry of the Armed Forces (R):

The second section, from 1:52 to 4:58 in the misleading livestream, shows a superimposed graphic from British newspaper The Guardian in the top corners of the video.

Below is a comparison between the misleading livestream (L) and The Guardian’s video (R):