A video has been viewed hundreds of thousands of times in multiple posts on Weibo, Facebook and Twitter which claim it shows penguins flying in the South Pole. The claim is false; the video is actually computer-generated spoof created by the BBC in 2008 as part of an April Fool's Day hoax. 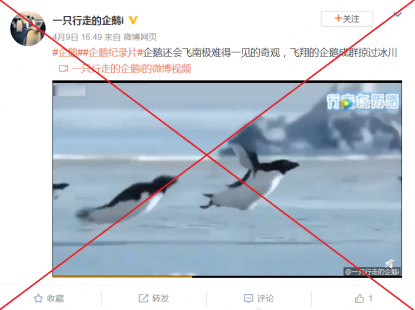 Screenshot taken on November 16, 2020, of the misleading Weibo post

It purports to show penguins taking flight. A voiceover states they are a “recently discovered colony of penguins”.

The video, which appears to have several watermarks, was published alongside a simplified Chinese-language caption that translates to English as: “#Penguin##PenguinDocumentary# Penguins can fly. A rare spectacle in the South Pole -- flying penguins flock across glaciers.”

A keyword search found a longer version of the video published here on the YouTube account of the UK public broadcaster BBC, dated April 1, 2008. It is titled: “Flying Penguins | World Penguin Day | BBC”.

Below are two screenshot comparisons of the video in the misleading Weibo post (L) and the BBC’s YouTube video (R): 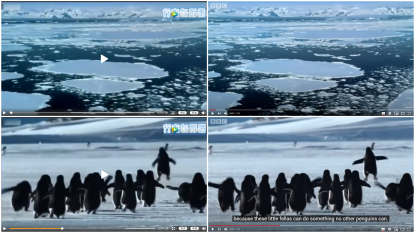 The video's description states in part: “A behind the scenes look at how the BBC created the BBC iPlayer trail for April Fools' Day, featuring a colony of flying penguins.” It then provides a link to “the April Fool video” which directs to the aforementioned flying penguins video on its YouTube channel.