A video has been viewed hundreds of thousands of times in multiple posts on Facebook, Twitter and YouTube which claim it shows shredded Trump ballots in the US state of Pennsylvania. The claim is false; the clip actually shows fliers sent out by Republicans in Pennsylvania with applications for mail-in ballots. 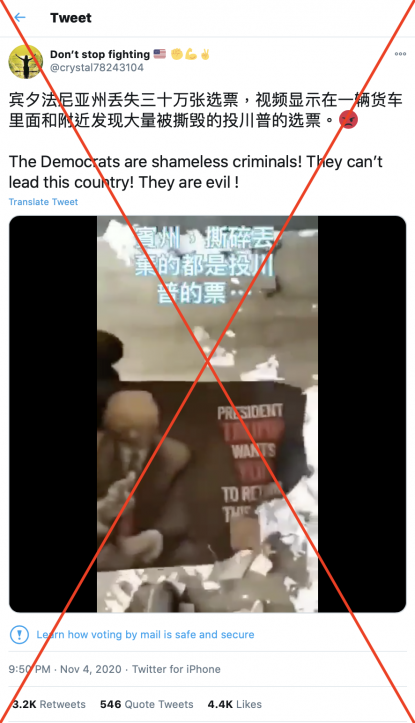 The post’s caption reads: “Pennsylvania has lost three hundred thousands ballots, the video shows there are a large number of shredded Trump ballots found in and near the truck. The Democrats are shameless criminals! They can’t lead this country! They are evil!”

The traditional Chinese-language caption superimposed on the video reads: “Pennsylvania, all shredded ballots were votes for Trump”.

At the video’s three-second mark, the man holds a flier close to the camera. It reads: “President Trump wants you to return this”. 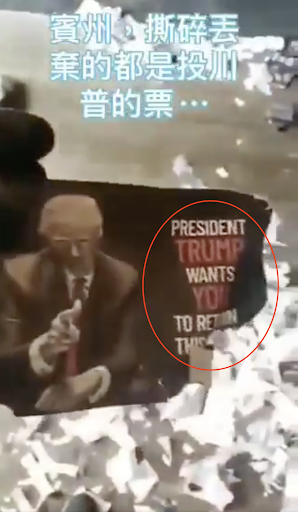 A screenshot, taken on November 12, 2020, of the misleading video with the slogan circled in red by AFP.

A keyword search on Google found a flier with a similar design published here in a report by US media company NPR on September 18, 2020.

The photo was captioned as: “A mailer shows President Trump encouraging mail-in voting, despite his vocal opposition to it.”

Below is a screenshot comparison of the misleading video (L) and the NPR photo (R): 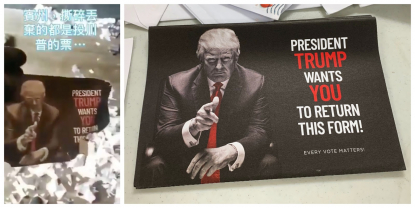 A screenshot comparison of the misleading video and the NPR video.

At the video’s four-second mark, the man turns over the flier. The text on the back of the flier reads: “Pennsylvania Application of Mail-in Ballots”.

He can be heard saying: “No it’s a Pennsylvania application for mail-in ballot and they do have people’s addresses on the back of them, they were never mailed out.” 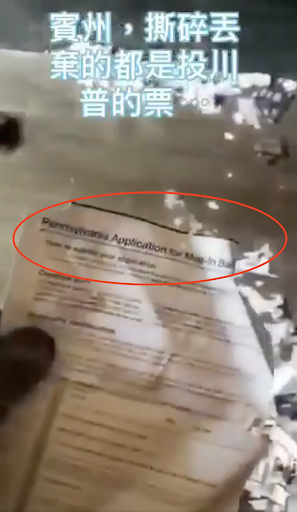 A screenshot, taken on November 12, 2020, of the misleading post with the title of the application form circled in red by AFP.

The application form seen in the video corresponds with one shown in a report by US broadcaster WGAL, an NBC-affiliated television station licensed in Pennsylvania, on September 2, 2020.

Below is a screenshot comparison of the misleading video (L) and the image in the WGAL report (R):

A screenshot comparison of the misleading post and the WGAL photo.

The man’s claim that the video shows application for mail-in ballots that “were never mailed out” is also misleading.

US fact-check site Politifact debunked a longer version of the video in which it shows a sign for a business, R.R. Donnelley, towards the end of the clip. A spokesperson for the company told Politifact the video shows printing waste that was returned from a recycling facility. “Recycling of print production waste is a normal practice associated with a direct mail project of this extent,” the spokesperson said.

The misleading posts were also debunked by Taiwanese fact-check site My Go Pen here on November 6, 2020.