Skip to main content
This handout from Myanmar's Ministry of Information taken and released on April 13, 2020 shows Myanmar's State Counsellor Aung San Suu Kyi talking to government officials from the Yangon region via a video conference from the presidential house in Naypyidaw during a television programme aimed at combating the spread of the COVID-19 novel coronavirus. (AFP / Handout)

Multiple Facebook posts and an online article shared thousands of times claim Facebook CEO Mark Zuckerberg has announced plans to automatically delete accounts that post critical comments on the profile of Myanmar State Counsellor Aung San Suu Kyi. The claim is false; on June 25, 2020, Facebook said no accounts will be automatically deleted for posting criticism on Aung San Suu Kyi's profile; as of June 29, there has been no official announcement from the social media company of the purported policy.

The claim was published on a news website here on April 3, 2020. The article was then shared thousands of times on Facebook here and here. 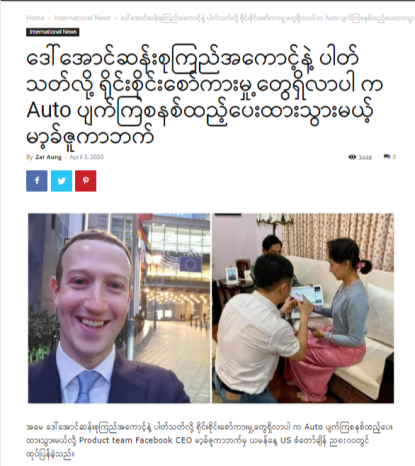 A screenshot taken on June 16, 2020, of the misleading posts on thutanews.com

The article’s Burmese title translates to English as: “Mark Zuckerberg will have an account auto-remove system if there is any harassment on Aung San Suu Kyi account.”

The article also reads, in part: “Facebook CEO Mark Zuckerberg announced a statement, at 8 pm US standard time yesterday, that an automatic deleting system will be introduced for nasty and rude comments under Aung San Suu Kyi's Facebook profile.”

The article circulated online just days after Aung San Suu Kyi opened a Facebook account on April 1, 2020. Suu Kyi said the profile was created to increase communication with the public during the COVID-19 pandemic.

“It is not true that we are automatically deleting accounts that are critical of Myanmar’s State Counsellor,” a Facebook spokesperson told AFP by email on June 25, 2020.

The spokesperson added that content would only be removed if it was deemed to be in violation of Facebook’s policies.

“Our Community Standards are clear about where we stand on issues like hate speech and bullying - we do not allow it on the platform. Other violations include people who misrepresent their identity or who impersonate others. The consequences for violating our policies vary depending on the severity of the violation and a person’s history on our platform,” the spokesperson said.

As of June 29, a search on Facebook’s online newsroom also found no announcement about the purported policy.