Skip to main content
TOPSHOT - Saudis and foreign residents circumambulate (Tawaf) the Kaaba in the Grand Mosque complex in the holy city of Mecca, on October 4, 2020, as authorities partially resume the year-round Umrah for a limited number of pilgrims amid extensive health precautions after a seven-month coronavirus hiatus. (Photo by - / AFP)

A video has circulated online in Pakistan in 2021 alongside a claim it shows police at Mecca's Grand Mosque, Islam's holiest site, shooting dead a Saudi dissident. The claim is false: the man was arrested after he wielded a knife and shouted support for “terrorist” groups, police told state media.

The post's Urdu-language caption translates to English as: “Why raised anti-government slogans? A pilgrim was shot dead with six bullets in the House of Allah.”

The video shows a man dressed in a long white tunic -- known as a thawb -- walking among worshippers. He can be heard chanting in Arabic and appears to praise the Islamic State group.

“Glory for the Islam, Allahu Akbar (God is the Greatest)…God glorify the Islamic State in Iraq and Levant (Syria), and in Yemen and everywhere”. 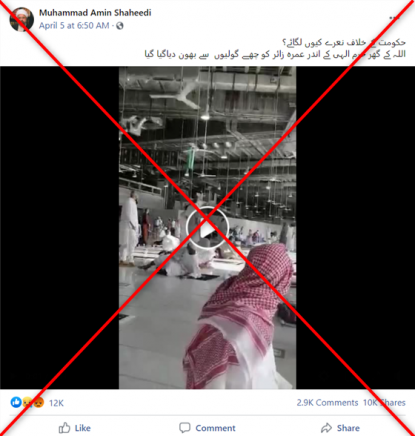 The same video along with a similar claim was posted here, here and here on Facebook.

A reverse image search of the video's keyframes on Google found the clip has circulated in reports about a man who was detained for wielding a knife.

The state-run Saudi Press Agency quoted police in an April 1 report about the incident on March 30, 2021.

It says the man was arrested at the Grand Mosque -- not shot dead as claimed in the misleading posts.

“He was immediately arrested and legal procedures have been taken against him”.

The same video was also shared in a report by Egypt-based Huda TV on its official Facebook page here.

The post's caption reads: "Makkah Police: The Security Forces of the Haram arrested a person carrying a weapon and chanting phrases in support of terrorist groups last Tuesday."