Skip to main content
A health worker inoculates a man with a Covid-19 vaccine in Colombo on February 16, 2021. (AFP / Ishara S. Kodikara)

A screenshot of a television interview with a Sri Lankan opposition leader has been shared in multiple Facebook posts alongside a claim he said the Oxford/AstraZeneca vaccine is not effective in protecting people from Covid-19. The screenshot, however, has been taken out of context: the original TV news segment shows the politician discussing the Oxford/AstraZeneca vaccine’s efficacy against new variants of the coronavirus.

The screenshot, which shows Sajith Premadasa speaking on television network Hiru TV, was published here on Facebook on February 14, 2021.

The Sinhala-language chyron translates to English as: “Oxford vaccine is not a successful one”. 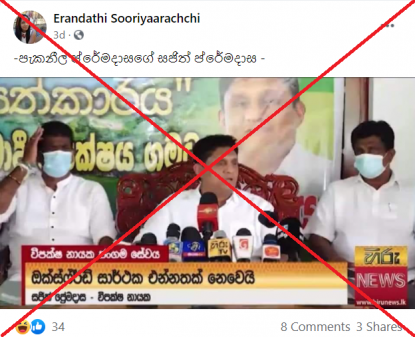 "Plaquenil Premadasa" is a reference to comments Premadasa made in 2020 urging the government to make plaquenil, commonly known as hydroxychloroquine, available to treat Covid-19 patients.

The post circulated online as Sri Lanka distributed doses of the Oxford/AstraZeneca vaccine to select groups. The vaccine is set to be made available to the general public from March 2021.

The screenshot, however, has been taken out of context.

A review of Premadasa's full remarks show that he was specifically talking about the efficacy of the vaccine against "new variants of the coronavirus."

His interview, which aired on Hiru TV on February 13, 2021, was published on YouTube here. His comments about the Covid-19 vaccine can be heard from the 18-minute 55-second mark to the 19-minute seven-second mark.

“Tests have revealed that Oxford/AstraZeneca has not been successful in combating new variants of the coronavirus,” he said. “This is the same vaccine that is due to be procured to Sri Lanka. This is a grave situation".

Scientists have raised concerns about the efficacy of Covid-19 vaccines against three principal variants that emerged in Britain, South Africa and Brazil.

Oxford University researchers, however, said that their vaccine has “similar efficacy” against the British variant, which has been detected in Sri Lanka. The study has not been peer reviewed as of February 19, 2021.

The US Centers for Disease Control and Prevention and the World Health Organization state here and here that more research is needed to assess the efficacy of vaccines against Covid-19 variants.