Multiple Facebook posts share a photograph they claim shows members of the Hindu nationalist Rashtriya Swayamsevak Sangh group carrying food and medicine to the survivors of a deadly flash flood in a remote Indian Himalayan valley on February 7, 2021. The claim is false: the photo has actually circulated online since 2013 and has nothing to do with the glacier disaster in Uttarakhand, which killed 60 people and left 150 others missing.

The post’s caption in Hindi translates to English as: “Thirteen villages in Chamoli’s Tapovan region have been reduced to ruins. There are no roads left, bridges have been washed away. Rashtriya Swayamsevak Sangh’s workers are leading from the front, carrying sacks of grain on their shoulders so that no one has to go to sleep hungry or die of disease. We are grateful.” 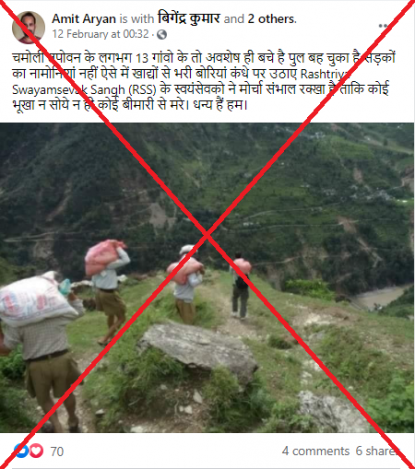 The caption refers to the devastation caused by a flash flood in Chamoli district of Uttarakhand on February 7, 2021, as AFP reported here.

A reverse image search on Google found the same photo published here in a report about the RSS’s relief works in flood-hit areas of Uttarakhand on July 1, 2013. 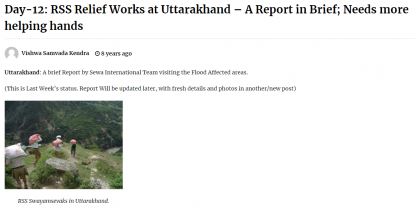 The report and photo were also published on a blog on the same day.

The RSS’s relief work was highlighted in a statement published on their website on June 19, and their efforts were reported here a week later by The Hindu on June 26, 2013.