Skip to main content
This photo taken on November 12, 2015 in Grigny, near Paris, shows Coca-Cola soft drink bottles on the new assembly line at a Coca-Cola Entreprise bottling plant.(Photo by Eric PIERMONT / AFP)

Facebook posts shared thousands of times purport to show a photo of Coca-Cola bottles dumped in the street in Malaysia after civil rights groups called to boycott the brand over alleged ties to Israel. This claim is misleading: the photo was in fact taken in the Philippines in April 2020 when the drinks fell from a truck that swerved to avoid a collision.

It shows a photo of Coke bottles scattered across a highway with several trucks in the background. The post’s caption, written in misspelled English, reads “Israil products are band by Malaysia”. 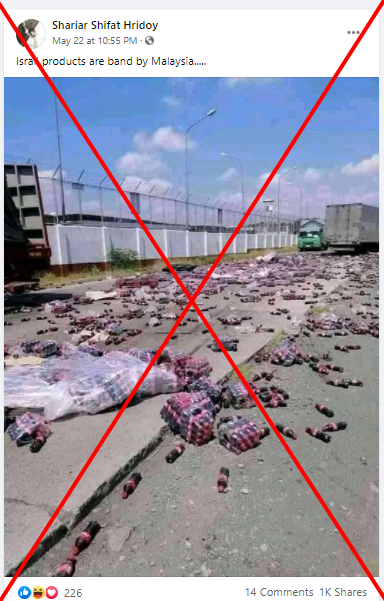 The post circulated as civil society groups in Malaysia called to boycott Coca-Cola over the brand’s alleged ties to Israel, after a spate of deadly fighting between Israel and Hamas in May, in which Israeli strikes on Gaza killed 254 Palestinians, including 66 children.

Coca-Cola has been hit by claims that it funds Israeli armed forces, which it has repeatedly denied. In May, the brand said that calls for a boycott in Malaysia were based on “false information” and “a lack of understanding of our presence in and commitment to the Middle East”.

The company said last year that “we don’t transfer funds to support armed forces in Israel or any other country in the world”.

Similar boycotts of the beverage have been called in Malaysia in the past.

Posts sharing a similar claim have been shared thousands of times by Facebook users around the world, including in Egypt, India, Tunisia, Bangladesh, Bosnia-Herzegovina and the Philippines.

A reverse image search on Google shows the image is part of a set of photos uploaded by Philippine broadcasters ABS-CBN and GMA News on April 16, 2020.

ABS-CBN’s Tagalog-language caption reads, “hundreds of bottles of soft drinks are scattered on the road after they fell from a truck that tried to avoid a head-on collision with another truck in Silangan, Canlubang Calamba City, Laguna this Thursday”.

Both news outlets attributed the photo to Matt Palentinos, who first uploaded the images here on his personal Facebook account earlier that same day.

Palentinos, a resident in the Philippine province of Laguna, said that he was merely passing by the area when the incident happened.

“This happened just outside the Coca-Cola Warehouse here in Silangan”, he told AFP.

A search on Google Maps located the area where the incident happened, just outside a Coca-Cola bottling plant in the province.

Below is a screenshot comparison of the photo (L) and the location where it was taken as seen on Google Maps (R):