Skip to main content
This photo illustration shows a man holding her phone showing emergency alert text messages announcing locations that confirmed COVID-19 patients have visited, among others, in Seoul on March 10, 2020. - Allegations of an affair, a civil servant accused of slacking off to go dancing: South Korea's openness about infected patients has been key in its fight against the coronavirus but raised uncomfortable questions over privacy and stigmatisation. (Photo by Jung Yeon-je / AFP)

A screenshot of what appears to be a Covid-19 emergency text alert has been shared repeatedly on Facebook in March 2021 alongside a claim that it was sent out by the Seoul Metropolitan Government. The claim is false: according to South Korean government's database and a Seoul offical, the purported alert is fake; the phone number seen in the text message is also inactive.

The screenshot was published here on Facebook on March 14, 2021.

The Facebook post’s caption translates as: “An emergency text from Seoul city. It baffles me.” 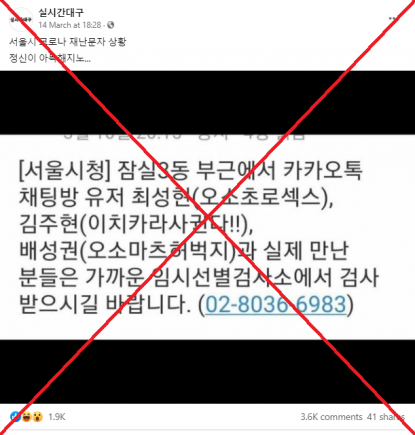 The screenshot was also shared alongside similar claims on Facebook here, here and here.

However, the claim is false and the purported alert is fake.

An official at the Seoul Metropolitan Government told AFP via phone on March 22, 2021 that no such alert was sent by the city government and clarified that emergency text alerts in Seoul are sent out to the public by local district offices under the name of each office, not by the city’s central government.

Below is the screenshot comparison between the fake alert seen in the misleading Facebook post (L) and a genuine alert notification sent out by Seoul's Eunpyeong District Office on March 23, 2021 (R):

Screenshot comparison between the fake alert seen in the misleading Facebook post (L) and the genuine alert notification (R).

Emergency notifications sent out by other district offices in Seoul are also written in a similar format to that from Eunpyeong District Office, as seen in this screenshot below of the message sent out by Seongbuk District Office. 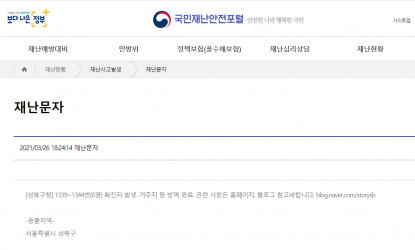 Screenshot of the archived emergency text by Seongbuk District Office, taken on March 29, 2021.

A database of emergency text alerts that is managed by the South Korean government also shows no record of the fake notification seen in the misleading Facebook post. All genuine alerts are recorded including the one from the Eunpyeong District Office, which can be seen here.

AFP tried the number seen in the misleading notification and found the number does not exist.