Experts say this video shows soldiers, not protesters, from a Myanmar rebel group

A video has been viewed tens of thousands of times on Facebook alongside a claim it shows young anti-coup protesters who joined a leading rebel group in Myanmar in May 2021. The posts circulated online after young protesters reportedly joined ethnic rebel groups to fight the military. However, the video has been shared in a misleading context: experts told AFP that the people in the video correspond with images of soldiers, not protesters, from a different ethnic rebel group.

The post claims the video shows young protesters, “Generation Z” or “GZ”, who have reportedly joined ethnic rebel groups to fight the military. It suggests the footage was filmed in Myanmar's Karen state, the heartland of leading rebel group Karen National Union (KNU) which has been repeatedly hit by junta air strikes.

“The military training graduation ceremony of the first batch of GZ. They are having fun joking around with Karen girls,” the Burmese-language caption reads. “We are also very happy to be joking around with them. KIA/KNU did their part well. We also picked up the flowers from the jungle to give it to them.”

“KIA” refers to the Kachin Independence Army, a rebel group in Kachin state, where clashes have also flared with the military.

Various ethnic rebel outfits in Myanmar -- which have no loyalty to either the junta or to deposed leader Aung San Suu Kyi -- could together pose a threat to the army's rule.

The same video was shared on Facebook here and here alongside a similar claim.

However, experts told AFP the posts were misleading.

David Mathieson, a political analyst on Myanmar, said that the video did not show young protesters, but rather soldiers from the Karen National Liberation Army (KNLA), the armed wing of the KNU.

“They're all wearing KNLA uniforms and carrying M-16's,” he told AFP. “The form of the ceremony is quite consistent with how the KNLA operates.”

KNLA soldiers can be seen in this AFP photo taken in Kayin state in 2015, during a military parade to mark the 66th Karen Revolution Day.

The insignia on the uniform in the AFP photo also corresponds with the badges worn by the men in the video. 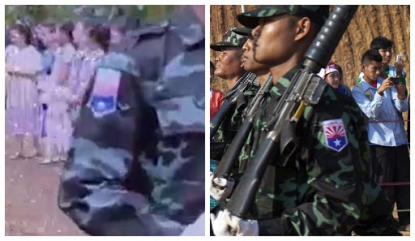 screenshot comparison of the video (L) and the AFP photo (R)

Richard Horsey, a political analyst with expertise on Myanmar, also said the men in the video appear to be members of the KNLA.

“These recruits are graduating in KNU uniforms with KNU arm patches -- Gen Z are not joining the KNU,” he said.

“Second, these graduates look nothing like the Gen Z people being trained - they all look Karen and they are all male.”

The KNU head of foreign affairs, Padoh Saw Taw Nee, told AFP the clip did not come from the KNU.

“This is an old video”, he said. “This was not coming from the KNU information source.”