A video has been viewed thousands of times in multiple Twitter posts in May 2021 alongside a claim that it shows the moment that debris from a Chinese rocket fell to the Earth. The claim is false: the video shows debris from the SpaceX Falcon 9 rocket that disintegrated as it re-entered the Earth’s atmosphere shortly after takeoff in March 2021.

The video was published here on Twitter on May 9, 2021, where it has been viewed more than 700 times.

In the clip, white streaks of light can be seen travelling through the sky in a residential area.

A man can be heard saying: “Oh my god, what am I seeing?” 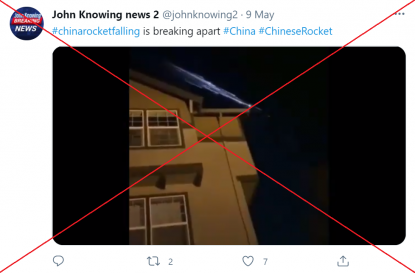 The video circulated online on the same day a large segment of a Chinese rocket re-entered the Earth's atmosphere and disintegrated over the Indian Ocean, AFP reported. No injuries were reported.

The uncontrolled re-entry of the 18-tonne object had sparked concerns about possible damage days earlier.

The video was also published along with similar claims such as here, here and here on Twitter.

The claim is false. The video shows a SpaceX rocket that disintegrated shortly after it re-entered the Earth’s atmosphere in March 2021.

A longer version of the video was published by Twitter user Ches Allen here on March 25, 2021.

Allen’s caption reads: “YO OREGON WHAT DID I JUST SEE".

In a follow-up tweet, he wrote: “Apparently it was SpaceX”.

The video was filmed in Newberg city in US state Oregon. It corresponds with Google Street View imagery seen here.

Allen spoke to Canadian TV broadcaster CityNews on March 26, 2021 about the video.

Jonathan McDowell, astrophysicist at the Harvard-Smithsonian Center for Astrophysics, told CityNews the streaks of light in the video are rocket debris.

“The breakup of a discarded rocket stage that had been in space about three weeks, and was re-entering the atmosphere,” said McDowell in the news video.

McDowell also tweeted in the evening of March 25 about SpaceX’s Falcon 9 rocket re-entering back to the earth.

“The Falcon 9 second stage from the Mar 4 Starlink launch failed to make a deorbit burn and is now reentering after 22 days in orbit. Its reentry was observed from the Seattle area at about 0400 UTC Mar 26.”

The Falcon 9 second stage from the Mar 4 Starlink launch failed to make a deorbit burn and is now reentering after 22 days in orbit. Its reentry was observed from the Seattle area at about 0400 UTC Mar 26. pic.twitter.com/FQrBrUoBHh