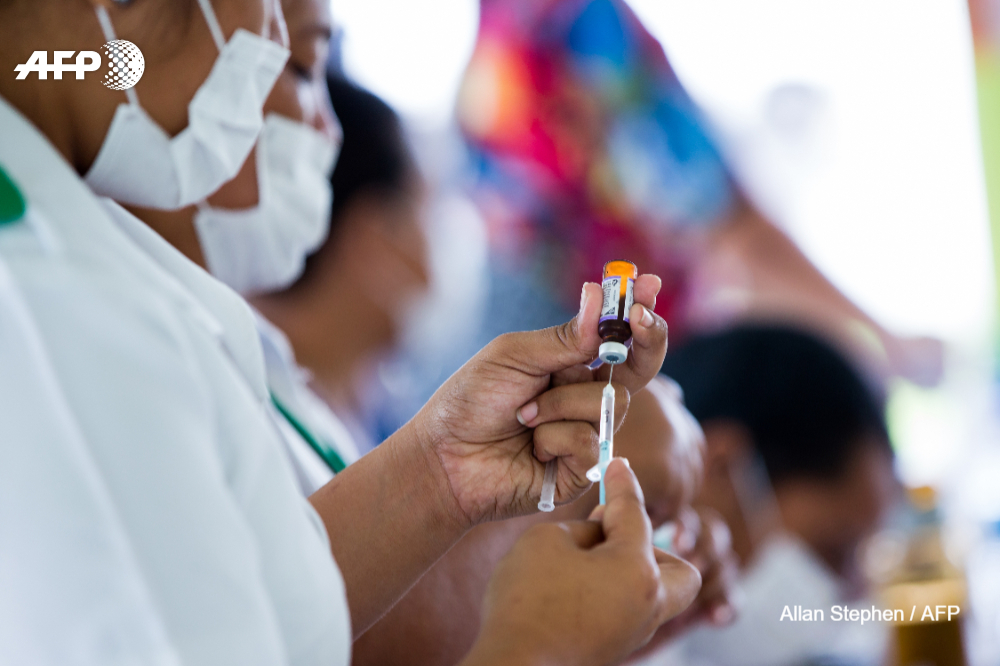 Experts: Samoa's measles outbreak is caused by underimmunisation -- not the vaccine itself

Multiple Facebook and Twitter posts claim that the measles vaccine is causing a deadly outbreak of the highly infectious disease in Samoa. People are being “killed off by the vaccine,” claims one post, which were shared by a US-based anti-vaccination activist. The claims are false; it is not biologically possible for the measles vaccine to cause an outbreak of the disease; experts say the Samoa measles outbreak, which has killed more than 70 people according to official statistics, was caused by underimmunisation.

AFP Fact Check found multiple posts, for example this one published on Facebook on November 26 by a Hawaii-based anti-vaccine activist, claiming that the measles outbreak in Samoa is due to a mass vaccination campaign.

The lengthy caption states in part: “The vaccine is spreading measles.

“Create measles outbreaks with the vaccine and then threaten the people to vaccinate or jail. This is now happening because Samoa realise the danger of vaccines since babies were dying from the vaccine and the Prime minister's own grandchild was vaccine injured.

“I bet most cases were vaccine strain and the people that died were either malnourished, lack of vitaminA or underlying medical issues. Or killed off by the vaccine.

Measles is a “highly contagious” disease caused by a virus. It cannot be cured but can be prevented by a "safe and effective" vaccine, according to the WHO.

The main vaccine used is the MMR or measles-mumps-rubella vaccine, which contains live but weakened measles, mumps and rubella viruses that trigger an immune response inside the human body to protect people against natural infections, according to Australian health authorities.

The misleading posts claim that in the Samoa outbreak “most cases were vaccine strain”.

This is false; it is “not biologically possible” for the MMR vaccine to cause a measles outbreak, according to Dr. Helen Petousis-Harris, a vaccinologist at the University of Auckland.

The Samoa measles outbreak is also caused by a different strain of the disease from that used in the MMR vaccine, according to this WHO and UNICEF report.

“The outbreaks in Samoa and Tonga are caused by the D8 strain (genotype) of measles virus,” the report found.

The D8 strain is a wild-type measles virus, which are naturally occurring and non-mutated, as opposed to the attenuated, or weakened strains found in vaccines.

Measles vaccines do not contain the D8 strain of the viruses, the WHO told AFP.

“The measles strain used to make the vaccine is different from the D8 strain that is causing measles cases in Samoa. The vaccine strain does not cause measles disease, and has never been detected circulating in the population during any outbreak.”

“Irrespective of the strain of measles virus, the vaccine protects against all strains. MMR vaccines are not known to cause measles disease,” UNICEF told AFP in an email dated December 10.

The misleading post claims that people who died in the Samoa measles outbreak were likely “killed off by the vaccine”.

“The vaccine is more dangerous then measles,” the misleading post claims.

“The MMR vaccines in current use are extremely safe and the profiles are well established,” vaccinologist Dr. Petousis-Harris said.

“The deaths reported associated with MMR vaccines are almost exclusively because of error (mixing the vaccine with a muscle relaxant instead of water.)”

In 2018 in Samoa, two babies died after receiving the MMR vaccine, according to local police.

The WHO told AFP by email on December 12 that the deaths were not caused by the vaccine itself. "The investigation concluded that the infants’ deaths were due to a human error," it said.

UNICEF told AFP: “Tragically the two deaths from improper vaccine administration occurred which resulted in the programme halting for a period of 10 months; and also a drop of confidence in vaccination.

“As such, a large number of children born since the end of 2016 would not have had the opportunity to be vaccinated creating a pool of susceptible children under the age of five years and it is these children who we have seen are greatly affected during this measles outbreak.”

UNICEF told AFP that most measles cases and over 90 percent of deaths in the current Samoa outbreak were in children under five.

While measles vaccines are highly effective, some recipients may not respond to the vaccine and therefore not develop any immunity. However, getting vaccinated is still much safer than the disease, as the WHO illustrates here using a hypothetical example of a school of 1,000 students:

The Samoan government has reported a surge in the nation’s coverage rate since launching a mass vaccination campaign in November.

“The largest outbreaks are in countries with low measles vaccination coverage, currently or in the past, which has left large numbers of people vulnerable to the disease,” the WHO states on its website.

According to UNICEF: “It is the low vaccination coverage that resulted in the outbreak we are seeing.

“The measles virus is one of the most highly contagious human pathogens known. It requires a very high population immunity of 92-94%. To achieve this level of immunity requires at least 95% coverage with two doses of measles-containing vaccine.”

An academic paper titled “Measles outbreak in a community with very low vaccine coverage, the Netherlands,” studied the relation between vaccine coverage and measles infections. It concluded:

“These data confirm that measles infection causes severe disease and that vaccination is the most effective means of preventing the disease and its complications.”

Children in poorly-immunised communities are more susceptible to measles and other infectious diseases such as polio, which was reported in the Philippines for the first time in 18 years in September 2019, AFP reported here.

According to the WHO: “Severe measles is more likely among poorly nourished young children, especially those with insufficient vitamin A, or whose immune systems have been weakened by HIV/AIDS or other diseases. Unvaccinated young children are at highest risk of measles and its complications, including death.”

The American Academy of Pediatrics added: “However, in recent years some parents have refused or delayed vaccinating their children out of fear or misinformation about the safety of the measles vaccine. This means there are more unvaccinated children, adolescents, and adults in our communities.