Health authorities blame undervaccination for polio outbreak in the Philippines

An online article shared hundreds of times on Facebook and Twitter claims the World Health Organisation (WHO) has “confirmed” the recent polio outbreak in the Philippines was caused by the vaccine for polioviruses. The claim is misleading; the report omits the fact that the WHO blamed poor immunisation coverage, not the vaccine itself, for polio’s reemergence in the country.

The misleading article was published here by UK-based magazine What Doctors Don’t Tell You on October 21, 2019.

The article’s headline states: “Polio outbreak in Philippines caused by the vaccine, says WHO”.

The report states in part: “A polio outbreak in the Philippines -- the first in over 20 years -- has been caused by the vaccine, the World Health Organization (WHO) has confirmed.

“The weakened virus in vaccines replicates in children's stomachs before it is excreted. In rare cases, the virus can strengthen in regions where sanitation and hygiene are poor, the WHO has said.”

A purported reference list at the bottom of the article states: “Source: Associated Press, 19 October 2019”.

According to information on the WHO website, polio is "a highly infectious viral disease, which mainly affects young children.

"In a small proportion of cases, the disease causes paralysis, which is often permanent. There is no cure for polio, it can only be prevented by immunization." 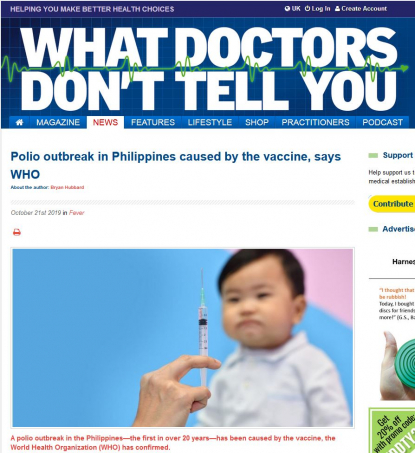 The claim is misleading; the WHO said low vaccination rates, but not the vaccine itself, leave children more vulnerable to a particular type of poliovirus, which in this case had caused the polio outbreak in the Philippines.

Health authorities in the Philippines recently detected the country’s first polio case since 2001, according to this AFP report published on September 19, 2019.

On that day, the Philippines’ health department declared a polio outbreak, saying a single confirmed case is considered an epidemic in a polio-free country.

The WHO and UNICEF also issued a joint statement about the confirmed poliovirus case in the Philippines on September 19.

Both of the United Nations agencies said the case was caused by a type of virus called vaccine-derived poliovirus type 2, and children in poorly-immunised communities are more susceptible to it.

Polio vaccines protect people against the disease as they contain a weakened form of the poliovirus, which activates and develops immunity in the body.

However, the weakened virus, which replicates in children's intestines for a short period of time before it is excreted in their faeces, can continue to circulate.

"The longer it is allowed to survive, the more changes it undergoes. In rare instances, the virus can change to a vaccine-derived poliovirus (VDPV), a form that has regained the ability to cause paralysis," the WHO-UNICEF joint statement says.

The statement continues: "The polio outbreak in the Philippines is confirmed to be from a circulating vaccine-derived poliovirus type 2.

"Poorly conducted immunization activities, when too few children have received the required three doses of polio vaccine, leave them susceptible to poliovirus, either from vaccine-derived or wild polioviruses."

Both the WHO and the Philippine health department told AFP low vaccination rates, and not the vaccine itself, had caused cases of vaccine-derived polio.

When asked if undervaccination, instead of the vaccine itself, causes the spread of vaccine-derived polio, Philippine health department's immunization program manager Maria Wilda Silva told AFP in a text message on November 8: “That is correct”.

When approached for comments on the misleading claim, a WHO representative told AFP in an email on November 7: “The polio outbreak in the Philippines was not caused by the polio vaccine.”

"OPV helps the development of immunity by multiplying in the gut of recipient children, who also excrete the virus for a few weeks during the immediate period after immunization. This helps children who have not been vaccinated to also acquire immunity if they come into contact with such viruses, called herd immunity.

"If immunization coverage is high, the virus will disappear from the environment in a few months, protecting all children in the community -- both vaccinated and unvaccinated.

"However, when large numbers of children remain unvaccinated in a community, the virus could circulate among this large number of unvaccinated children for several months or even years, sometimes acquiring the capacity to cause disease over this long period. This is what is referred to as vaccine-derived poliovirus cases."

A travel notice from the US Centers for Disease Control and Prevention (CDC) states in part: "An outbreak of polio has been reported in the Philippines. This outbreak is caused by vaccine-derived poliovirus (VDPV), a sign of low oral polio vaccine coverage in the country.”

Australia's Department of Health issued a similar alert for travellers regarding 2019's polio outbreak, which says in part: "On very rare occasions, if a population is seriously under-immunised, the vaccine-virus can begin circulating in the community and, over a period of some 12-18 months, can mutate and cause severe symptoms. These viruses are called circulating vaccine-derived polioviruses (cVDPV).”