Facebook posts shared in Ethiopia in Oromo and English allege that Prime Minister Abiy Ahmed has been banned from travelling abroad over human rights violations in the restive Tigray region. The claim surfaced after a Amnesty International report said hundreds of civilians in Tigray had been killed by soldiers from neighbouring Eritrea. However, the African Union (AU) confirmed that the leader was not under any current travel restrictions. Furthermore, he recently visited Eritrea.

“Dr Abiy Ahmed has been banned for travel from every country... The reason is that he has been accused of human rights abuse (sic)”, reads part of the caption in Oromo, a widely-spoken language in Ethiopia.

The claim has been shared 50 times since it was published on March 14, 2021, on a page called “Finfinne Media Network”. The account has previously published other false content, including a claim debunked by AFP Fact Check that the US had announced airstrikes on Ethiopia. 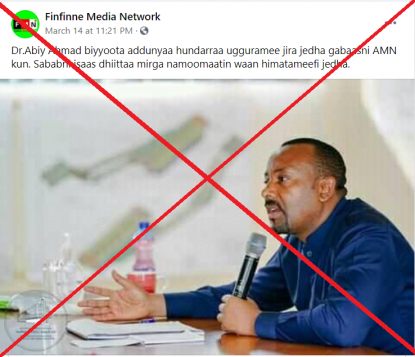 The travel ban claim was also shared from an account called “Africa Media Network”. The account is managed from Ethiopia and was created in March 2021, according to page transparency information provided by Facebook.

The travel ban claim emerged after Amnesty International in February released an in-depth investigation into the slaughter of hundreds of civilians in the city of Axum in Tigray. 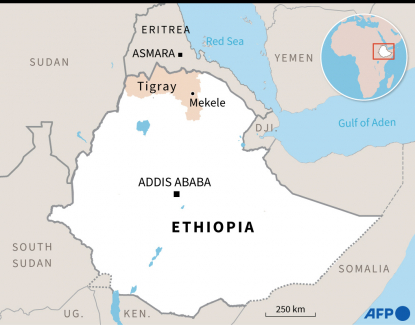 Based on satellite imagery and eye-witness testimonies, the report found that Ethiopian and Eritrean military forces had taken control of Axum "in a large-scale offensive, killing and displacing civilians with indiscriminate shelling and shooting" on November 19, 2020.

"In the nine days that followed, the Eritrean military engaged in widespread looting of civilian property and extrajudicial executions," Amnesty International said.

Abiy has been under scrutiny from foreign governments since military operations began in northern Ethiopia in November 2020.

US Secretary of State Antony Blinken has condemned the alleged atrocities committed in Tigray and called on the AU to help address the crisis in the war-torn region.

"The United States is gravely concerned by reported atrocities and the overall deteriorating situation in the Tigray region of Ethiopia," Blinken said in a statement in February 2021.

The AU -- which has previously condemned attacks on civilians in Tigray -- told AFP Fact Check “there are no travel restrictions” in place regarding Abiy, in an email sent on April 1, 2021.

Furthermore, the Ethiopian leader travelled to Eritrea on March 26, 2021 for talks with President Isaias Afwerki. 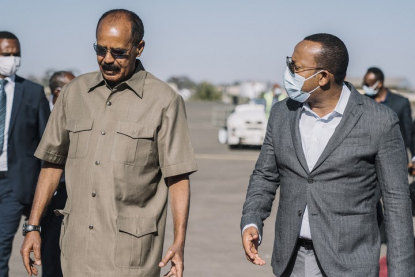 "The government of Eritrea agreed to withdraw its forces out of the Ethiopian border," Abiy said in a statement posted on his Twitter account on March 26, 2021.