Skip to main content
A woman wearing a face mask crosses a roadblock manned by soldiers at entrance to the Chow Kit Market, currently under lockdown due to the Conditional Movement Control Order limiting the activities of people in Malaysia as a preventive measure against the spread of Covid-19, in Kuala Lumpur on May 6, 2020. (AFP / Mohd Rasfan)

Several videos showing close-up shots of face masks have been shared online alongside a claim that the masks' black threads are “worms” or “parasites”. The claim is false, according to scientists who told AFP that the threads are harmless fibres. 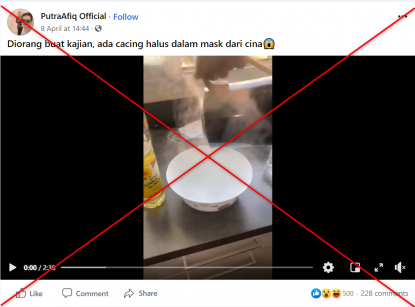 It shows someone placing a face mask over a bowl of steaming water, before capturing close-up shots of the mask's very fine black threads.

A man in the video can be heard speaking in Turkish. His comments translate to English as: “Come here! Quick! Look how it moves! I swear, it moves. Don't use a mask, folks. This one is also growing. God knows how many they are in a mask.”

The post’s Malaysian-language caption reads: “They did a study, there are fine worms in masks from China.”

The Arabic text seen at the start of the video reads: “Turkish people discovered fine worms growing on some masks imported from China.”

The video was also posted alongside a similar claim on Facebook here, here and here; on YouTube here; and on TikTok here.

Other clips of face masks have also circulated online with a similar claim in English, Serbian, German, Greek, Czech and Bulgarian.

Jana Nebesarova, assistant professor at the electron microscopy laboratory at the Biological Center of the Czech Academy of Sciences, told AFP on March 31, 2021: “Most likely they are pieces of fabric. The air is full of these fabric fragments which float around freely together with pollen, mould, parts of dead cells from our skin, microscopic parts of earth etc.

“The mask or a (swab for a Covid-19) test can contain threads that either got there during the manufacturing process or during their handling just before they were about to be used. In any event, they are not dangerous for a healthy person; this is stuff we breathe in every single day and our ciliated epithelium, which lines our respiratory system, knows how to deal with these alien microscopic particles very well."

Marina Jovanovic, an expert in biological science and research associate at the Institute of General and Physical Chemistry in Belgrade, questioned the conditions of the “experiments” shown in the misleading videos.

“When you put on the mask, when you touch it, you bring on various fragments ... all sorts of impurities,” she told AFP on April 6, 2021. “What we saw on that mask were fragments, not parasites or anything alive.”

Jeffrey Marlow, assistant professor of biology at Boston University, told AFP he did an experiment which found only “strands” on a brand new mask.

“When I took a new mask out of the bag and looked at it under a Nikon upright microscope at 80x, I saw a network of clear and translucent strands. Roughly once or twice every square centimetre, there were darker strands that were short and often curled up. Over the course of my about 10-minute observation in the lab, none of the strands in the mask moved,” he said in an email on April 5, 2021.

Scientists say fibres in the masks can move either due to static electricity or because these “aerosol fibres” are so light that they are carried by air currents not usually felt by humans.

“When you try to catch an object in a pool, it moves away from you because you created a wave with your hand. Similarly, when you approach a thread with the tip of a pair of tweezers, you create a wave in the drop of water and the thread moves. However, that does not in any way prove that the particle is alive or capable of moving on its own,” Nebesarova said.