Easter not derived from name of ancient Mesopotamian goddess

Social media posts say Easter is derived from Ishtar, the name of the Assyrian goddess of sex and fertility -- a claim that resurfaces yearly around the Christian holiday. But experts dismiss the assertion and say that Easter is thought to have originated from words denoting East and the dawn, or, less likely, from the name of the Anglo-Saxon goddess Eostre.

“This is Ishtar: pronounced ‘Easter,’” says a meme shared in a March 20, 2021 Facebook post ahead of the April 4 holiday.

It goes on to claim that, “Easter was originally the celebration of Ishtar, the Assyrian and Babylonian goddess of fertility and sex. Her symbols (like the egg and the bunny) were and still are fertility and sex symbols.”

“After Constantine decided to Christianize the Empire, Easter was changed to represent Jesus. But at its roots, Easter (which is how you pronounce Ishtar) is all about celebrating fertility and sex,” the post adds. 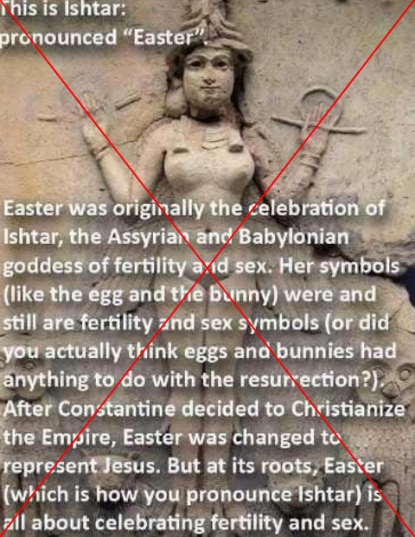 The claim has been shared thousands of times on social media every year around Easter since at least 2013. That year, it was posted on the Facebook page of the Richard Dawkins Foundation for Reason and Science -- which promotes “a secular worldview” -- and shared 226,000 times.

However, the idea that Easter is linked to Ishtar is false.

“The equation of Ištar and Easter is crazy," Jacob Lauinger, associate professor of Assyriology at Johns Hopkins University, told AFP by email.

Addressing the pronunciation of Ishtar as Easter, Lauinger said: “We know very little about how Akkadian (of which Assyrian is a dialect) words and names were pronounced, but it appears that at some point Ištar was pronounced issar.”

“There is consensus that... ‘Easter’ is derived from the words used in Germanic languages for the East, the direction, and by extension for the dawn etc,” he said.

The late Duke University professor emeritus of religion Hans Hillerbrand wrote that it is generally accepted that the Latin phrase designating Easter week, in albis, understood as the plural of alba (dawn), became eostarum in Old High German, then Easter in English and Ostern in modern German.

According to McGowan, “Easter, in other words, just means a festival related to the East, more precisely to the dawning day. This idea was present in early Christianity (prayers for instance were conducted facing East because of the expectation of the arrival of Christ with a new ‘day’ or age), and does not require or commend any other explanation.”

Another possibility is that the word is derived from a Germanic goddess.

“Slightly more serious (than the Ishtar claim) is the idea that there was an Anglo-Saxon goddess Eostre,” said McGowan, adding that this explanation was suggested by Bede, an Anglo-Saxon theologian who died in the 8th century.

Paul Duff, a religion professor at The George Washington University who specializes in early Christianity, also mentioned this possibility, saying in an email that Bede “connects it to an Anglo-Saxon fertility goddess, Eostre. But it is likely that he was guessing.”

While this explanation is often used, particularly because Eostre is associated with rabbits and eggs, it is not the most commonly accepted.

“The name is in any case a red herring, since it is only in Germanic and English contexts this ‘East’ language is used for the feast,” according to McGowan.

The word for Easter in other languages such as French (Pâques) or Spanish (Pascua) is derived from Latin and Greek Pascha, meaning Passover, known as Pesach in Hebrew, he added.

The visual used in the social media posts is known as the Burney Relief, or “Queen of the Night,” a Babylonian clay panel created at least in the 18th century BC and held by the British Museum in London.

She is thought to be a goddess from the Mesopotamian region, possibly  Ishtar, Ereshkigal, or Lilith, a demonic figure.

Ishtar was the goddess of sexual love -- but also of war -- usually depicted with the lion and having storehouse gates as her emblem, not eggs or bunnies, according to Encyclopedia Britannica and this webpage about the goddess.

2021 is the second year that Christians celebrated the resurrection of Jesus Christ while under restrictions aimed at curbing the Covid-19 pandemic.