Claims that pricking a stroke victim in the ear and fingertips with a needle could save their lives have been circulating for years, most recently through a wave of new Facebook posts in Africa. The posts attribute the advice to “Chinese medicine and professors”. We spoke to medical professionals practising both Chinese and Western medicine, who told us the advice was unfounded -- and that it’s dangerous, as it could encourage people to delay urgent treatment for a stroke victim.

The hoax has been circulating for more than a decade -- originally via a widely-circulated chain email, as reported by the New York Times in 2006.

Thirteen years later, thousands of people have again been sharing the harmful advice about how to treat a stroke, a sudden interruption of the blood supply to an area of the brain which can be fatal or leave the victim with serious disabilities.

One of the posts has been shared more than 2,500 times since it was published by a Nigerian user in Prayer Rain, a public Facebook group with over 300,000 members, in June. We’ve archived the post here.

“HOW TO SAVE SOMEONE FROM STROKE. THIS IS WHY YOU SHOULD ALWAYS HAVE A NEEDLE IN YOUR POCKET,” it reads. It goes on to describe a supposed Chinese medicine technique for saving a stroke victim’s life by pricking their fingers and earlobes with a needle. 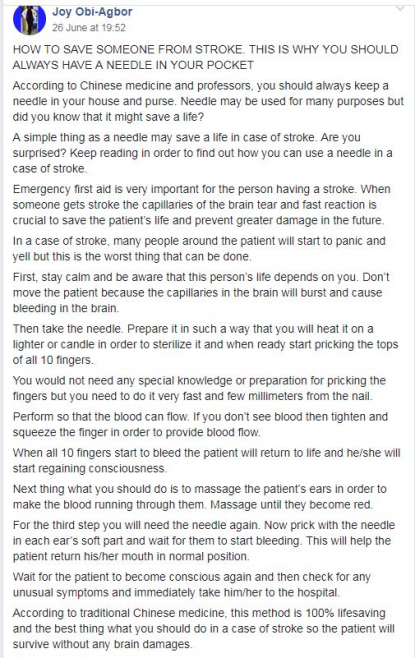 Similar posts have been shared from accounts in Kenya, Ghana, Nigeria and South Africa, among others.

The comments under the posts suggest many users believed the advice, with some expressing gratitude for the tip. 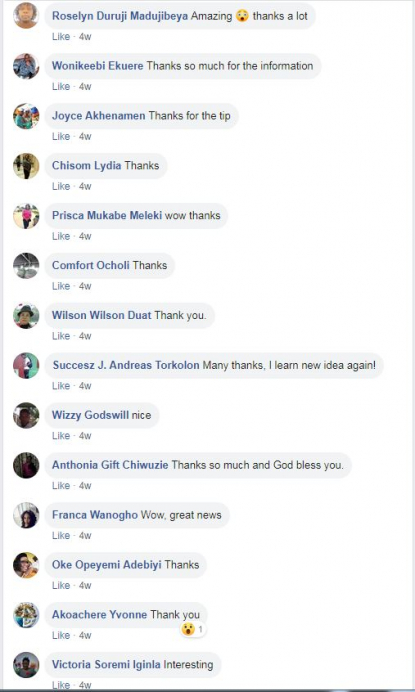 A screenshot of comments on one of the misleading Facebook posts

Consultant neurologist Dr. Dilraj Singh Sokhi, the head of Stroke Services at the Aga Khan University Hospital in Nairobi, told AFP that the treatment recommended in the Facebook post was “dangerously misleading” and could delay potentially life-saving emergency medical treatment.

“Time is of the essence,” Dr. Sokhi told AFP in an interview at the hospital.

“For every minute that passes, one million nerve cells are dying in the brain during a sudden stroke attack to the brain. We know that the sooner you get to a relevant healthcare facility the better the outcome, as the treatment we can provide can only be given within the first few hours of the stroke.”

The needle technique recommended in the post could be harmful in itself, Dr. Sokhi warned.

“The pain experienced by injuring these most sensitive parts of the body might cause the patient’s blood pressure to rise and worsen the stroke. Also, if the needles are not sterile there is a risk of transfer of infections.”

Dr. Sokhi gave an interview on KTN television recently which covered the urgent nature of strokes and the emergency treatments available.

No, this is not a treatment recommended by Chinese medicine practitioners

The posts attribute the advice to Chinese medicine. But registered practitioner Wendy Wong, an assistant professor at the Chinese University of Hong Kong, told AFP that the posts gave a misleading interpretation of acupuncture techniques used in traditional Chinese medicine.

“In the national healthcare system in China, in a Chinese medicine hospital, they will use acupuncture together with Western medicine for acute stroke,” Dr. Wong told AFP via email. This is applied to different parts of the body, “from the limbs to the body trunk”, depending on the nature of the stroke.

“It is recommended that (people) seek consultation or immediate help from a Western medical doctor, since different countries have different regulation of Chinese medicine,” she said.

Like Dr. Sokhi, she stressed that professional medical personnel “should be the first to consult” in the event of a stroke.

“To protect patients' safety, I would like to say this article on Facebook is rather misleading,” Dr. Wong told AFP.

How to recognise a stroke

“It is important for the general public to understand what the symptoms of an acute stroke are, and the commonly used abbreviation is FAST,” he said.

The abbreviation is used by emergency health services such as the Red Cross and St John Ambulance to help people recognise the symptoms of a stroke. FAST stands for:

Face: Ask the person to smile. Does one side of their face droop?

Arms: Ask the person to raise their arms. Are they having difficulty keeping both of them raised?

Speech: Ask the person to repeat a simple phrase. Is their speech slurred or strange?

Time: to call emergency services if you recognise any of these symptoms, and make sure that the person is taken to hospital urgently.

According to the World Stroke Organization, strokes are the second leading cause of death for people over the age of 60 around the globe, and the fifth leading cause in people aged 15 to 59. One in six people will have a stroke at some point in their lifetime.