A graphic shared in multiple Facebook and TikTok posts purports to show Filipinos voted vice president Leni Robredo as the frontrunner to win the country's presidential election in 2022, according to a new poll. The graphic, however, has been doctored: in fact, the poll's results show Davao City Mayor Sara Duterte was favourite to replace her father, Rodrigo Duterte, as president.

The graphic was shared more than 200 times after it was posted on Facebook here on March 14, 2021.

The post’s Tagalog-language caption states in part: "Vice President Leni Robredo got a big lead in a survey conducted by EDS where she got 26%, higher than Senator Bong Go's 14% and Davao City Mayor Sara Duterte's 8%." 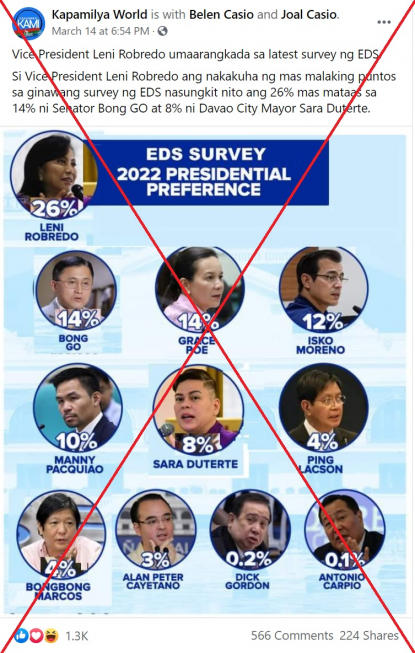 A screenshot of the misleading post, taken on March 29, 2021

The graphic purports to show Robredo won a local poll on who Filipinos would like to replace Duterte as president, securing 26% of the vote.

The post circulated online after local media ramped up coverage of potential candidates to replace Duterte, whose term expires in 2022.

The graphic was also shared alongside a similar claim here, here and here on Facebook; and here on TikTok.

The graphic, however, has been doctored.

Reverse image and keyword searches on Google found the original graphic was published on Facebook by local news organisation One News here on December 31, 2020.

The original graphic shows Sara Duterte in fact received 26% of the vote, while Robredo received 8%.

The percentage of votes for Go has been swapped with those of Ferdinand “Bongbong” Marcos Jr., who narrowly lost to Robredo in the 2016 vice presidential race.

The One News report reads: “One out of four Filipinos would vote for Sara Duterte as the country’s new president, according to the results of a Pulse Asia survey.

Below is a screenshot comparison of the doctored graphic (L) and the original One News graphic (R): 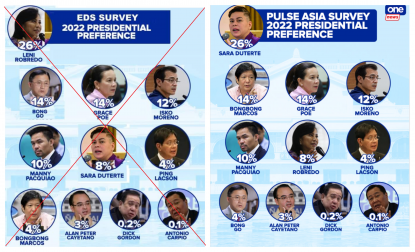 The numbers indicated in the One News report correspond with the survey findings published by Pulse Asia on December 31, 2020.

In a Facebook message to AFP on March 26, 2021, One News said their graphic had been doctored in the misleading Facebook posts.