Skip to main content
Using this side-by-side comparison, Kenya's Standard newspaper warned on its social media channels that one of its front pages had been doctored

Facebook posts claim to show the front pages of three leading Kenyan newspapers reporting on scandals involving key political figures. But the images are doctored and the papers have dismissed the altered front pages on their official social media accounts. Editors at the three media organisations told AFP Fact Check the false claims were most likely politically motivated as the country’s ruling party grapples with internal tension. They are part of a trend in Kenya of manipulating media content for political mileage.

A post published on May 28, 2020 on a Facebook page named “Truth & Facts” shared front pages of the Daily Nation, the Standard and the Star newspapers with digitally altered headlines.

A screenshot of the manipulated headline appearing on the Daily Nation, taken on May 28, 2020

A screenshot of the manipulated headline appearing on the Standard newspaper, taken on May 28, 2020

A screenshot of the manipulated headline appearing on the Star newspaper, taken on May 28, 2020

The newspapers have dismissed the items as “fake” on their respective social media accounts and cautioned readers against believing them.

To get your favourite publication delivered straight to your door step, text or send a WhatsApp message to +254 722 716329 today.

If it's not on our pages, it's fake. Avoid such by grabbing your favourite political newspaper now ---> https://t.co/lBK1m3bSBG pic.twitter.com/p7IhCVlWTj

Avoid fake news by getting yourself a copy of the bold newspaper on https://t.co/C6ban4E2FI pic.twitter.com/6LjKhwfa8t

The Standard newspaper told AFP Fact Check it had reported a similar matter to the Directorate of Criminal Investigations (DCI), a semi-autonomous body of the National police service responsible for the investigation of complex criminal cases.

Under Kenya's tough cybercrime laws, a person found guilty of publishing false information faces a fine of up to five million Kenya shillings (approximately 47,000 USD) and up to 10 years in jail.

“These are criminals as they are using our brand to spread propaganda… We are now pursuing legal action,” the Standard’s editor-in-chief Ochieng Rapuro said.

He added that the fake headlines could harm the paper’s credibility because they create “doubt on products and what we are doing”.

The bogus front pages tap into ongoing political strife as Kenya’s ruling Jubilee party faces internal power struggles. The tensions, reported by local media here and here, have resulted in some legislators being de-whipped over what has been described as “indiscipline and party disloyalty”.

“In the Kenyan situation, politics is becoming divisive and intense and it is these political factions that are fighting and using the spaces to spread propaganda,” Rapuro said.

The Daily Nation’s managing editor Pamela Sittoni also noted the fake front pages seemed part of a political campaign “because of the individuals whose names and pictures are being used”.

Made to look genuine

The doctored front pages used fonts, colours and layouts identical to the genuine ones. Only the splash story (the main headline) was altered while the other stories appearing on the front page that day remained unchanged. 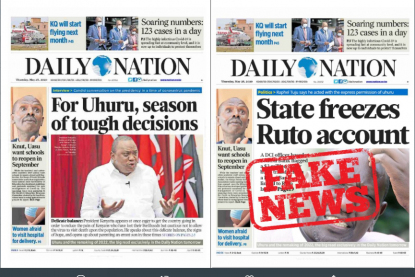 A screenshot showing the doctored and original front pages of the Daily Nation newspaper, taken on June 15, 2020 A screenshot showing the doctored and original front pages of the Standard newspaper, taken on June 15, 2020 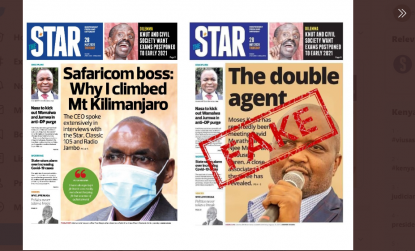 A screenshot showing the doctored and original front pages of the Star newspaper, taken on June 15, 2020

“If you look at the front pages that have been produced, they are fairly believable. So it is very easy for someone who does not have a good knowledge of fakes to believe that that is a fake edition of the paper,” Paul Ilado, the head of content at Radio Africa Group which owns the Star newspaper, told AFP Fact Check.

The doctored headlines allege that the accounts of Kenya’s deputy leader had been frozen as part of a bribery probe and his wife had gone into hiding, while lawmaker Moses Kuria was accused of trying to hammer out secret political deals.

AFP Fact Check has found no official evidence of Ruto currently being investigated. We have reached out to the DCI for comment and will update this article in case of a reply.

While Ruto has been acquitted of corruption charges before, his political opponents continue to accuse him of unscrupulous dealings.

Kuria, the lawmaker who was described as a “double agent” in the post, dismissed the claim (in a local language) as “a desperate political move”.

Africa Check editor Alphonse Shiundu, who has monitored the misinformation landscape in Kenya for several years, described the manipulated headlines as “stories that have existed on the social media grapevine but cannot be verified”.

“These are stories that can be believed but cannot be verified. They have existed in the social media grapevine but have never been verified and so for banter, rumour and gossip they make very good fodder. However, if you are looking for news, it is not news because it is not verifiable and you can see it is all made up as there is no proof behind it,” Shiundu told AFP.

Manipulation of media content to score political points is a common trend in Kenya. During the 2017 general election, doctored front pages of the Daily Nation claimed a candidate vying for the gubernatorial seat had defected from his party. The claim, which was also circulated as a print edition in a county in western Kenya, aimed to hurt the candidate’s popularity.

“That was a classic disinformation move to make sure that the candidate did not get a political win. The motive was to delegitimise the politician and sow confusion in the public space so that the voters wouldn’t know what is true and what is false,” Africa Check’s Shiundu commented.

Media organisations in Kenya are now stamping doctored publications with “fake news” labels and sharing them on their respective social media platforms in a bid to counter widely circulated claims which tend to be confusing to the audience.

Readers are also encouraged to seek information only on the newspapers' official website and social media accounts, where front pages are normally shared.