Skip to main content
A health worker holds up a vial of China's Sinovac COVID-19 vaccine during the first phase of vaccinations for health workers at a hospital in Manila on March 1, 2021. (AFP / Ted Aljibe)

As the Philippines gave emergency approval to the Chinese-made Sinovac coronavirus vaccine, a purported news graphic circulated online that appeared to show genuine comments about the jab from the Philippines' head of vaccine procurement, Carlito Galvez. The posts allege Galvez suggested the vaccine should be reserved for "poor Filipinos". The claim is false: the purported news graphic, which was shared  in multiple Twitter and Facebook posts, has been fabricated. Galvez's office denied he made the alleged remarks in a post on Twitter on February 23, 2021.

The purported news graphic was shared on Twitter on February 22, 2021. It was retweeted more than 300 times before it was deleted.

The graphic contains an image of Carlito Galvez, the Philippine official in charge of Covid-19 vaccine procurement. It attributes a quote to him in Tagalog that reads: "Let us not belittle Sinovac. Despite its 50.4% efficacy, it's better than nothing. The low efficacy rate is just not for health workers. It can be given to poor Filipinos so it doesn't go to waste."

“His own words,” the misleading post’s caption states. “Galvez, why don't you give your lung the jab so the vaccine doesn't go to waste.” 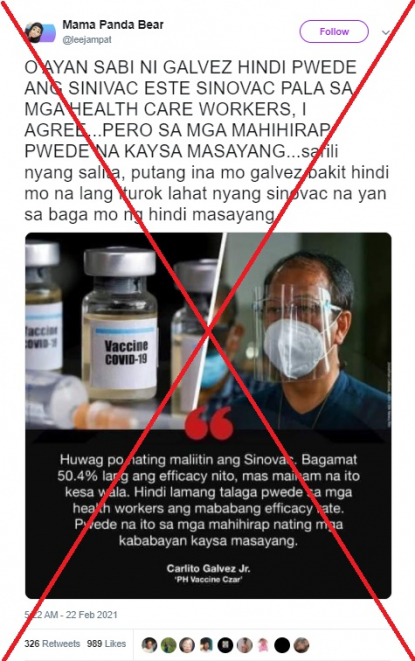 A screenshot of the misleading post, taken on February 24, 2021

The posts surfaced online after the Philippines’ drug regulator granted emergency approval to CoronaVac, made by Chinese firm Sinovac, on February 22, 2021. It said, however, the vaccine was not recommended for health workers due to published data suggesting it has lower efficacy than Covid-19 vaccines made by Pfizer/BioNTech and Oxford/AstraZeneca.

Workers considered essential to the economy and soldiers were likely to receive the first vaccinations in the Philippines, AFP reported.

Although trials in Turkey found CoronaVac to be 91.25 percent effective, other, more robust trials in Brazil only demonstrated an efficacy rate of around 50 percent.

The graphic in the social media posts, however, had been doctored.

Keyword searches on Google found the original was posted on Twitter by local news organisation ABS-CBN on December 22, 2020. It contains a different quote.

"All in all, if there's going to be (contract) signing this coming month, we will have 60 million (doses of Covid-19 vaccine) for the second quarter and third quarter," the original quote reads.

Galvez made the comments in a meeting on December 21, 2020, in which top government officials discussed the country’s Covid-19 vaccination programme.

The doctored image mimics the black, white and red colours used in the original ABS-CBN graphic, as well as the photo caption "Jonathan Cellona, ABS-CBN News/file", as highlighted below.

ABS-CBN denied publishing the graphic in the misleading posts, calling it “a fake art card using ABS-CBN News' template” in this statement posted on Twitter on February 23, 2021.

Galvez’s office denied he made the remarks in a tweet on February 23, which said he “has never issued any such public statement and will never do so.”