The video shows a man robbing an Asian shopper in the United States, not Hong Kong

A video of a man swiping cash from a customer in a shop has been shared repeately in multiple Facebook posts from Hong Kong. The posts warn about “South Asian guys” and have attracted racist comments. However, the video has been shared in a misleading context; it in fact shows a man snatching money from a shopper amid a spate of crimes against Asians in Oakland, California.

The video was shared by a Chinese-language Facebook page called ‘SaluteToHKPolice’ on February 6, 2021 and has since been viewed more than 18,000 times.

“This happened a few days ago. When shopping, watch out for suspicious South Asian guys nearby, and be careful of being robbed!” the Chinese-language caption reads. 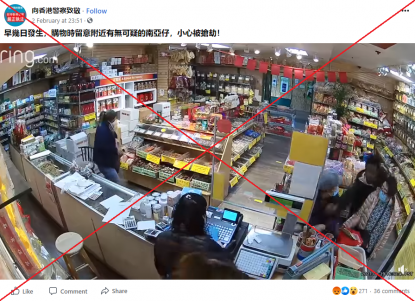 The footage shows customers being served in a shop. A man walks in and slowly approaches a woman before he snatches cash from her hand and runs away.

The same video has been shared by various Facebook pages and users in Hong Kong alongside warnings about South Asians.

“Tell your family, when out shopping, keep an eye out for South Asian guys nearby, they would rob,” wrote one Facebook user who shared the clip.

“South Asian people have never done any good things in Hong Kong!” one Facebook user commented. “It seems they speak Cantonese, could be Hong Kong”, another wrote.

However, the video has been shared in a misleading context; the robbery happened in the United States, not Hong Kong.

Reverse image searches on Google using key frames from the misleading footage, along with further keyword searches found a news article from February 4, 2021 by KTVU, a TV station based in Oakland, California, reporting a spate of violent crime against Asian Americans. 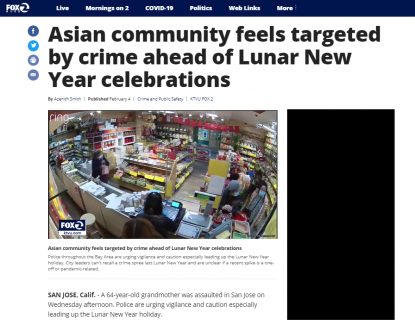 Screenshot captured on February 26, 2021, of the KTVU article

The article features the same video circulating on social media in Hong Kong. A reporter narrating the video says it shows a man snatching money from shoppers in Oakland's Chinatown.

Below are screenshots comparing the video circulating on Facebook (L) and KTVU’s video (R): 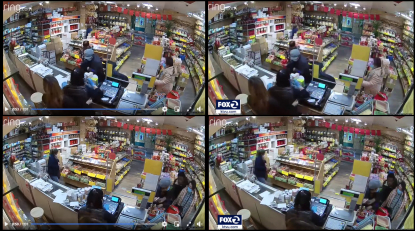 Deveion Lamont Byrd, 22, arrested by @oaklandpoliceca, charged by @AlamedaCountyDA w/robbing this woman at a Chinatown store & stealing from other victims in the area going back months pic.twitter.com/EWlOGCqf8u

Oakland Police Department said in a statement that they had arrested a man in connection with the robbery.