The post’s Korean-language caption translates to English in part as: “Kim Young-sam and Kim Dae-jung lie on the ground at a construction site to protest. These people are the main actors who were responsible for making a liberal democratic Republic of Korea into a place where Communists have free rein.” 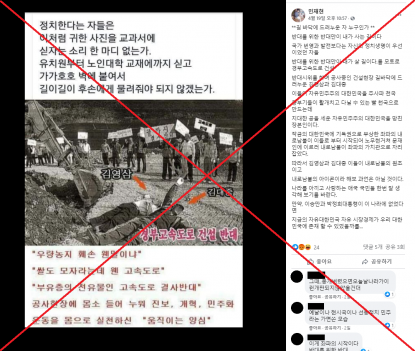 In the foreground of the monochrome photo, two people can be seen lying down on the ground next to what appears to be an excavator. A group of people holding protest signs can be seen standing in the background.

Superimposed text in the photo names the figure lying on the ground as former South Korean presidents Kim Young-sam and Kim Dae-jung.

Another superimposed text on the image’s bottom right reads: “Opposing the construction of the Gyeongbu Expressway.”

It reads: “How come no one in politics suggests this valuable photo should be put into national textbooks. Shouldn’t it be placed in every textbook from those used in kindergarten to those for the elderly, plastered on every family home and handed down to each generation?”

The quotations included at the bottom of the photograph appear to be slogans expressing opposition to the expressway project.

The Gyeongbu Expressway is an automobile expressway that connects South Korea’s capital of Seoul to the city of Busan.

The expressway was built between 1967 to 1970. It was one of the most important building projects at the time, according to South Korea’s National Archives.

Kim Young-sam, who was South Korea’s 7th president between 1993 to 1998, and his successor Kim Dae-jung, who served from 1998 to 2003, were both opposition lawmakers in South Korea’s legislature during that same period.

This is confirmed in South Korea’s presidential archives here and here.

Identical images and claims have circulated online as early as 2012 on Facebook here, here, here and here.

After conducting an image search on Naver using keyword descriptions of the photo, AFP found the original photograph published here by the South Korean news organization Newsis on October 24, 2007.

The photo’s caption reads: “With the expansion of a waste treatment facility by Jincheon and Eumseong Counties in North Chungcheong Province underway, nearby local residents of Tongdong-ri in Maengdong-myeon use an excavator to dig up a landfill. Residents have decided to strongly oppose the expansion of the waste facility and have been carrying out a protest for three days now in this location.”

The colour has been removed in the doctored photo.

In the doctored image, the words “against the expressway” have been added to the sign.

The phrase “opposing the construction of the Gyeongbu Expressway'' has also been superimposed in the altered image, as highlighted in red by AFP.

A close-up of the two figures on the ground in both photos shows both figures’ faces have been blurred in the altered image.

Below is a comparison of close-up images on the two figures in the doctored photo (L) and the original photo (R):

This photo, published by the local news organization Chungbuk In News on October 24, 2007, shows the same two villagers on the ground making a different gesture.

The demonstration held by the villagers of Tondgong-ri was covered by numerous local media outlets in North Chungcheong province at the time.