An image shared hundreds of times on social media claims to show details of public funds looted by Ibrahim Magu, the former chairman of Nigeria’s Economic and Financial Crimes Commission (EFCC). This is false; the image making the rounds has been doctored. The original infographic designed by Nigerian newspaper TheCable shows details of funds that were declared by a judge to be proceeds of crime linked to former first lady Patience Jonathan.

A Facebook post shared more than 250 times and archived here claims that Magu plundered the sums listed in the image: “About a year gone! Magu’s Loot, petitions and finding from panels are swept under, by Nigeria’s Most corrupt and Nepotistic Govt. Magu retired with our Treasury (sic).” 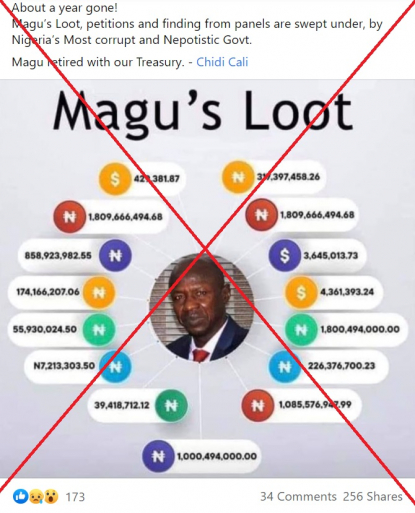 On July 6, 2020, Nigerian media reported that secret police had arrested Magu. In response, the EFCC released a statement on the same day, saying that Magu was neither arrested nor detained but only invited for questioning. Magu was accused of laundering N500 billion ($1.3 billion) and allegedly buying property in the United Arab Emirates, according to local media. He denied all allegations.

The questioning came after Nigeria’s attorney general Abubakar Malami sent a memo to President Muhammadu Buhari in June 2020  detailing allegations against Magu that were leaked to the press, as AFP reported here.

The original image doctored to show “Magu’s loot” was designed by TheCable newspaper in Nigeria and it shows sums of money forfeited by former first lady Patience Jonathan after a court ruled the funds were proceeds from crime.

It was tweeted by the newspaper in July 2019 -- a year before Magu was suspended.

After the edited version began making the rounds, TheCable released a warning stating that its image had been doctored. “It has come to TheCable’s attention that our infographic on funds forfeited by Patience Jonathan has been manipulated,” the newspaper said. “The infographic was photoshopped with 'Magu’s Loot' as the title. This is clearly misleading.”

In July 2019, the EFCC, led by Magu, won a court judgement for the forfeiture of N9.2 billion and $8.4 million recovered from Jonathan. The breakdown of these funds formed the basis for the original infographic.

Meanwhile, Magu has been away from the public eye since his suspension in 2020.