"Cairo in Egypt. Moon Jae-in and his wife are climbing up a trap. But, but, half of the picture shows the sky. Isn't it bizarre for Moon, who really likes to brag about his achievements?" reads Korean text superimposed on a photo shared on Facebook on January 22, 2022.

"The reason? It appears no one  was at the airport to say goodbye to him." 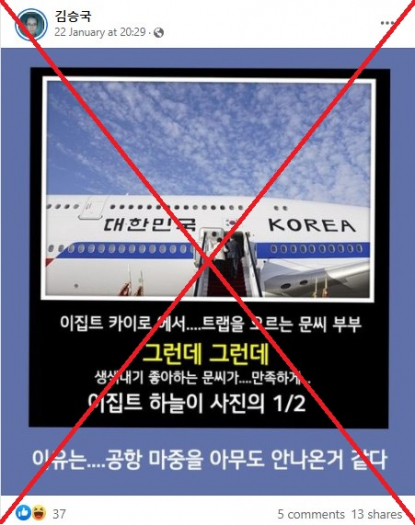 The same photo was shared in similar Facebook posts here and here.

One person commented: "No one came to say goodbye? No red carpets for him? No one cared about his visit. People must have treated him as if he didn’t exist."

Another wrote: "Is South Korea's reputation this bad?"

News footage from Moon's departure from Cairo airport shows he was seen off by a group of people.

Below is a screenshot comparison between the image in the misleading Facebook post (left) and the Yonhap photo (right):

The photo caption reads: "President Moon Jae-in and First Lady Kim Jung-sook are getting in the Republic of Korea Air Force One at the Cairo International Airport on 21st (local time) to leave Egypt after visiting three nations, including UAE and Saudi Arabia".

However, other photos taken by Yonhap on the same day show there were people at the airport to give Moon send-off as seen here and here. 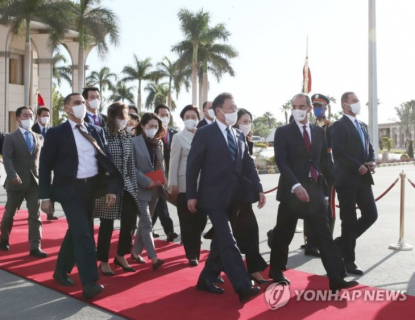 The caption to the first photo reads: "South Korean President Moon Jae-in is walking toward the Republic of Korea Air Force One at the Cairo International Airport on 21st (local time) with the Egyptian Minister of Communications and Information Technology Amr Talaat to leave Egypt after visiting three nations, including UAE and Saudi Arabia".

Photos taken by another South Korean news agency Newsis also show people were present at the airport upon Moon’s departure, as seen here and here. 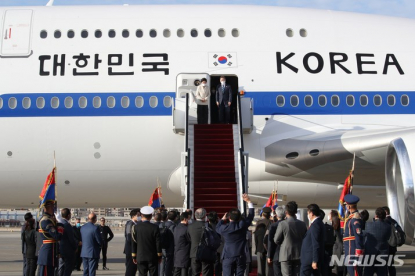 Screenshot of the Newsis' photo

The caption of the Newsis photo reads: "President Moon Jae-in and First Lady Kim Jung-sook wave to people who came to see them off at the Cairo International Airport on 21st".

People who came to see off Moon at the airport also can be seen in this video filmed by South Korean broadcaster KTV.