Multiple posts have resurfaced on social media implying that rideshare company Uber is introducing UberBus to South Africa. The claims are misleading; the company has made no such announcements and again denied plans to launch the service in the country.

A Facebook post published in South Africa on January 17, 2022, and shared thousands of times includes a picture of a man standing in front of a minibus branded UberBus. In the background is a pyramid.

“Uber is starting a war with the wrong people,” reads the post’s caption. 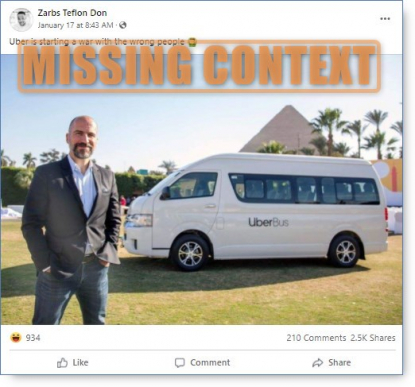 A screenshot of one of the misleading posts, taken on January 24, 2022

Other Facebook posts published here and here in South Africa include the same photo and also give the impression that a local launch of Uber's service is imminent. The suggestion is that local taxi operators will see this as a threat to their livelihoods.

Some comments agreed with the post’s sentiments, but with a good deal of humour also mixed in. 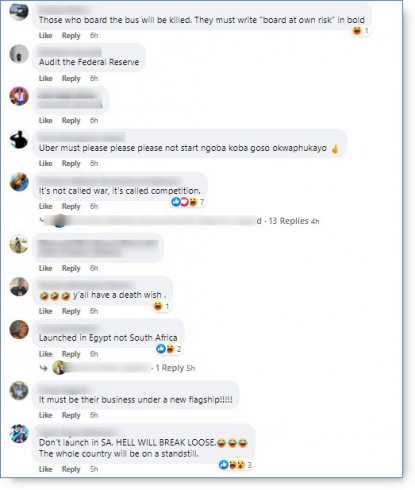 A screenshot of the comments section under one of the posts, taken on January 24, 2022

These posts, however, are misleading, since Uber has made no announcements about bringing UberBus to South Africa.

The informal taxi industry is responsible for transporting the majority of South Africa’s commuters, though the exact figure is unclear, as explained in this Africa Check debunk.

Ever since Uber began operating in South Africa in 2013, their drivers have faced regular violence and intimidation from traditional meter-taxi operators, who accuse them of stealing their jobs.

As reported by AFP in 2017, a South African Uber driver whose car was set alight eventually died from severe burns.

South African media outlets have also reported that members of various minibus taxi associations have engaged in violence, no longer just fighting each other for control of various routes, but also attacking Uber drivers for “stealing” what they believe are their clients.

UberBus would be direct competition for the minibus industry in the country. The company’s website says that with UberBus, “because you are sharing your rides with other Uber passengers, the price is affordable enough for everyday use, while still maintaining Uber standards”.

No UberBus in South Africa

A reverse image search showed that the picture has been online since 2018 when the UberBus service was launched in Cairo, Egypt. 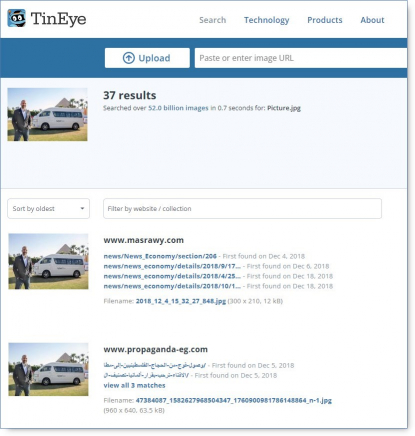 A screenshot of the reverse image search results on TinEye, taken on January 24, 2022

Similar misleading claims about UberBus coming to South Africa were made at the time, prompting Uber South Africa to tweet a denial: “For those asking about UberBus - this was launched in Cairo, Egypt. We have no plans to launch this product in South Africa,” it read in part.

For those asking about UberBus - this was launched in Cairo, Egypt. We have no plans to launch this product in South Africa and we would never contemplate launching it without full industry engagement and support.

This is still the case, according to the company.

“Please note that this is not true. We do not have any plans to launch UberBus in South Africa,” Mpho Sebelebele from Uber South Africa told AFP Fact Check on January 24, 2022.