Skip to main content
A man wearing a face mask walks out of a subway station at the central business district (CBD) in Beijing on November 4, 2020. ( AFP / WANG Zhao)

A screenshot of a Chinese state media report shared repeatedly online has been doctored to add a line announcing that China will restore a more centrally controlled economy. The image circulated after the country hit some of its biggest companies with new restrictions and regulations. It has been manipulated from a 2018 article that did not report the Chinese government had announced a shift in economic policy.

It shows what appears to be a simplified Chinese-language report published by the state-run Xinhua news agency.

The headline translates to English as: "(Economy) Supply and marketing cooperatives have been established in 95% of villages and towns across the country.

The report is about farming cooperatives in China.

The post's caption translates as: "Didn't expect it [the return of a planned economy] would happen so soon." 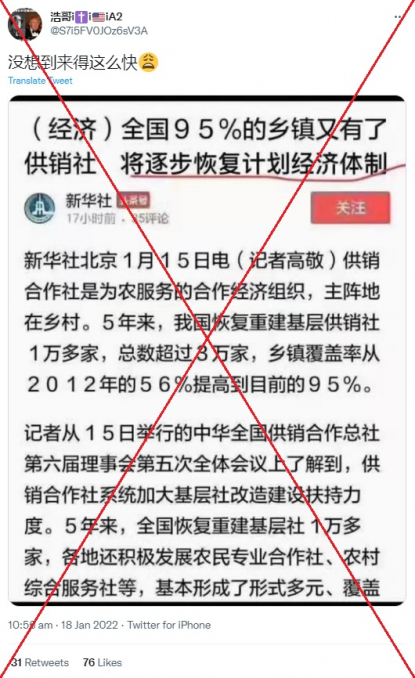 Under the regime of China's founding leader Mao Zedong, the state took over industries, and farmers were organised into collectives.

The economy thrived following a series of market-oriented policies that allowed private capital and foreign investments.

But one thing has not changed --  the Communist Party (CPC) holds tight to the reins of the economy, as reported here by AFP.

The image circulated online after China hit some of the country's biggest companies with new restrictions and regulations in 2021.

Some users were misled to believe the image is genuine.

"Driving backward in front of the cliff will only crash the car and kill themselves," wrote one person under a post.

"The old society before 1979 is coming back," another commented.

But the image has been doctored to add the text "will gradually restore planned economic system" onto the original headline of a Xinhua report originally published in 2018.

A keyword search found the report was published by Xinhua here on January 15, 2018.

The report is headlined: "Supply and marketing cooperatives have been established in 95% of villages and towns across the country".

The first two paragraphs of the original report are identical to the body of the article seen in the doctored screenshot.

Below is a screenshot comparison of the doctored image (left) and the original Xinhua report as seen in the mobile app (right): 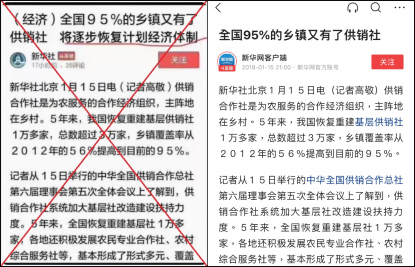 China's economy expanded at its fastest pace for 10 years in 2021, according to an AFP poll of analysts, but its strong recovery from the Covid-19 pandemic is threatened by Omicron and a property sector slowdown, AFP reported here.