A video showing thick smoke billowing from a building has been viewed tens of thousands of times in social media posts and news reports about a deadly attack in Abu Dhabi claimed by Yemen's Houthi rebels in January 2022. But the video has been shared in a false context; it has circulated since at least 2015 in reports about a fire that ripped through a supermarket warehouse in the United Arab Emirates capital.

Video showing thick black smoke rising from a building was shared here on Twitter on January 17, 2022.

The tweet reads: "Chaos in Abu Dhabi _#UAE" / '#Yemen's #Houthi rebels attacked with a drone near the airport. Oil tankers were targeted in the attack, in which 3 oil tankers came under its grip. The flames reached Abu Dhabi Airport.'" 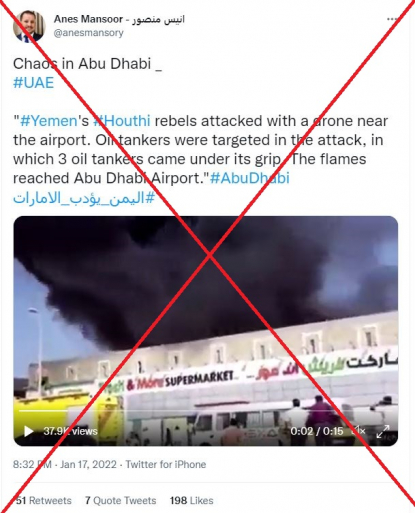 The video circulated with the false claim the same day Yemen's Houthi rebels claimed responsibility for a drone and missile attack that struck an oil facility and the airport in Abu Dhabi, killing three people and wounding six. AFP reported on the attack here.

The video was shared alongside a similar claim on Twitter here and here; and on Facebook here, here and here.

Pakistan's GTV News and India's Republic TV also used parts of the footage in their reports on the attack in Abu Dhabi.

However, the video is old.

A reverse image search found the same video was tweeted by Abu Dhabi Network, a UAE-based media outlet, on November 5, 2015.

Translated from Arabic to English, the tweet reads: "Right now.. a fire in Mussafah Industrial Area."

Below is a screenshot comparison of the video in the false post (L) and the footage from the 2015 tweet (R):

The video in the 2015 tweet -- which shows a building sign that reads "Fresh & More Supermarket" -- corresponds with multiple reports of a fire at a supermarket in Abu Dhabi's Mussafah Industrial Area in November 2015.

"Abu Dhabi Civil Defense and Rapid Intervention teams successfully controlled a fire that broke out in a supermarket's warehouse in the Mussafah Industrial Area today," the Dubai-based newspaper Khaleej Times reported on November 5, 2015.

The report said the fire caused no deaths but six people were injured and taken to the hospital.

The sign "Fresh & More Supermarket" is also visible in this video of the fire at Mussafah, tweeted by the UAE Ministry of Interior on November 5, 2015.

Below is a screenshot of the Ministry of Interior's tweet: 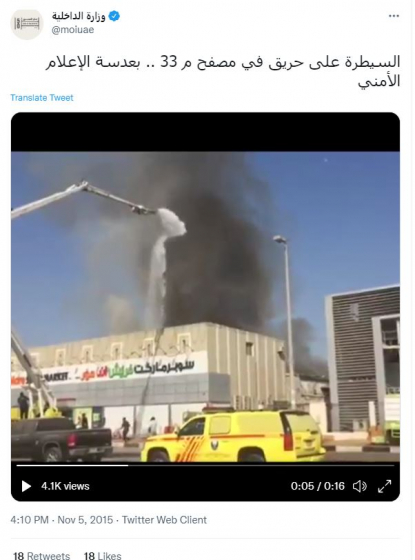 The blaze was also reported on by other local media, such as Gulf News and Emirates 24/7.