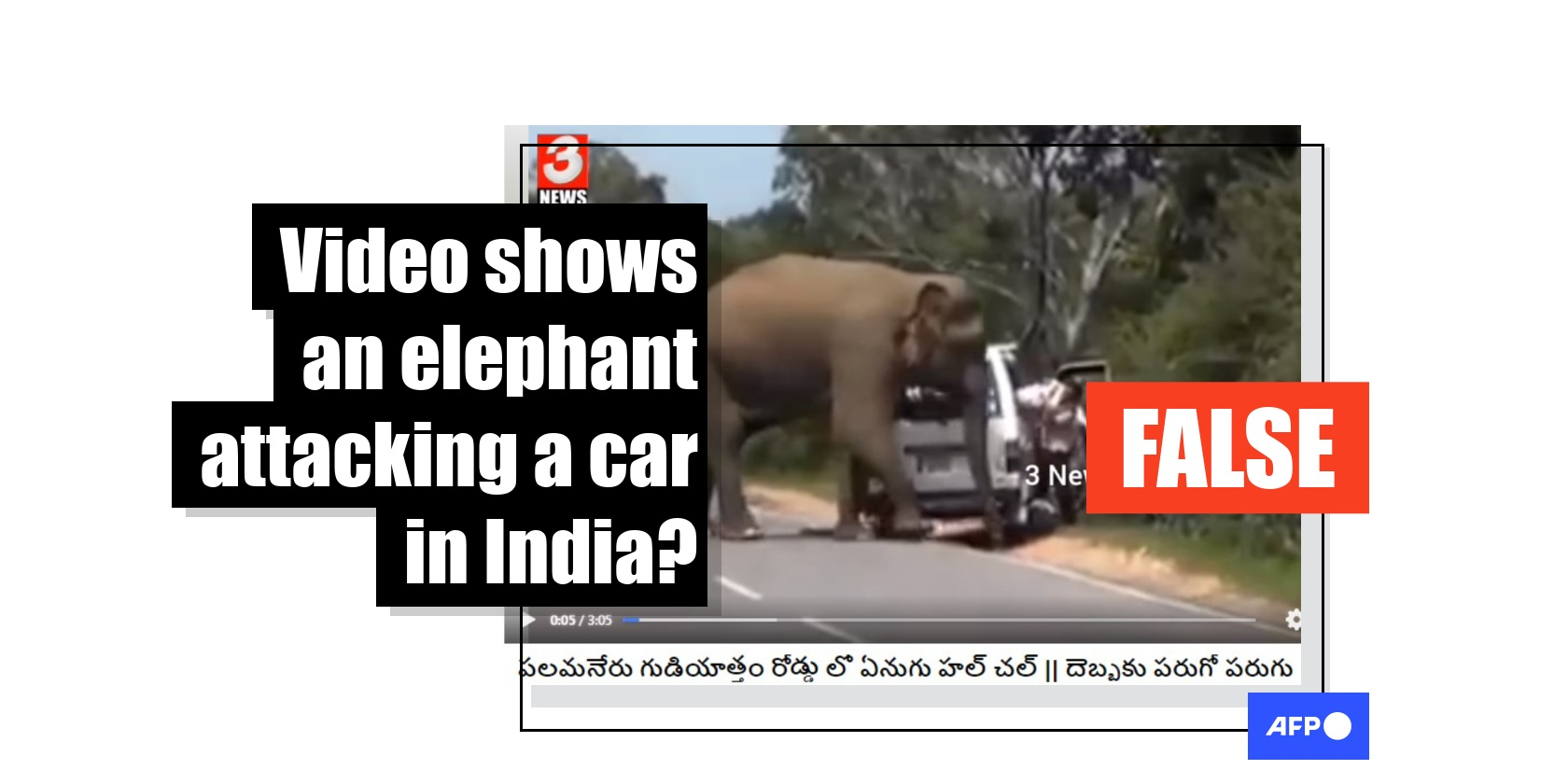 This video of an elephant attacking a vehicle is from Sri Lanka, not India

A video of an elephant attacking a vehicle full of people has been viewed thousands of times in Facebook posts that falsely claim it was filmed in India. In fact, the vehicle's licence plate and a tour company logo on the rear windshield -- seen in the video and an identical clip shared in news reports -- show the elephant encounter took place in Sri Lanka, which has some of the highest incidents of human-elephant conflict.

"The incident happened at Palamaner-Gudiyatham road, an elephant creating havoc," reads the Telugu-language caption shared here on Facebook on January 9, 2023.

The claim was shared alongside a video of an elephant shoving a white vehicle with its trunk before rummaging inside. Some of the vehicle's passengers can be seen escaping the car, but at least two later return to it and drive away after the elephant leaves.

Screenshot of the video with the false claim

As of January 24, 2023, there have been no recent public reports of a human-elephant conflict near Palamaner or Gudiyatham involving a vehicle. However, the area is known for elephant encounters that cause concerns among farmers and commuters, including when a herd obstructed traffic for several hours in December 2022, as reported here by the Deccan Chronicle, an Indian English-language newspaper.

Like India, Sri Lanka sees some of the highest incidents of human-elephant conflict in the world, resulting from elephant habitat loss due to deforestation, urbanisation and other human developments.

Sri Lanka's recorded elephant deaths increased tenfold and related human deaths tripled from 1991 to 2018, according to a study in Applied Geography, a peer-reviewed scientific journal published quarterly by Elsevier.

The same elephant video alongside a similar claim was also shared on Facebook here and here.

However, the clip was filmed in Sri Lanka, not India.

A reverse image search on Google found a longer version of the video posted here by the YouTube channel @primitivewildlifesl on January 1, 2023.

The scene beginning at the YouTube video's one-minute, 52-second mark matches the clip seen in the false posts.

Below is a screenshot comparison of the video seen in the false posts (left) and the video posted on YouTube (right): 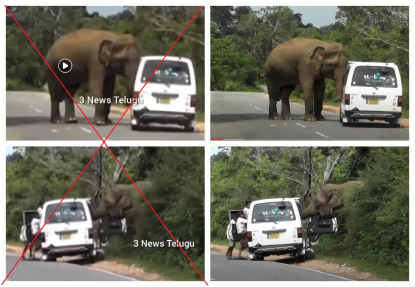 A closer look at the video shows letters and numbers on the licence plate of the vehicle that read: "NC GJ 8159" -- which is registered in Sri Lanka's North Central Province. A Colombo-based AFP journalist also confirmed this information.

No vehicle with that licence plate is registered in India, according to the country's Ministry of Road Transport and Highways.

The video also shows what appears to be a logo that reads "Holiday Sri Lanka" on the car's rear windshield.

A Google keyword search found it is a logo for Holiday Sri Lanka Tours, a travel agency based in Sri Lanka's Bowalawatta.

News coverage of the filmed elephant encounter began circulating in January on Sri Lankan news websites here and here, which reported the incident occurred in the country.

In response to an increasing number of incidents in which wild elephants attacked vehicles, Sri Lankan authorities announced in January they would arrest those who feed or harm wild elephants., as reported here and here.