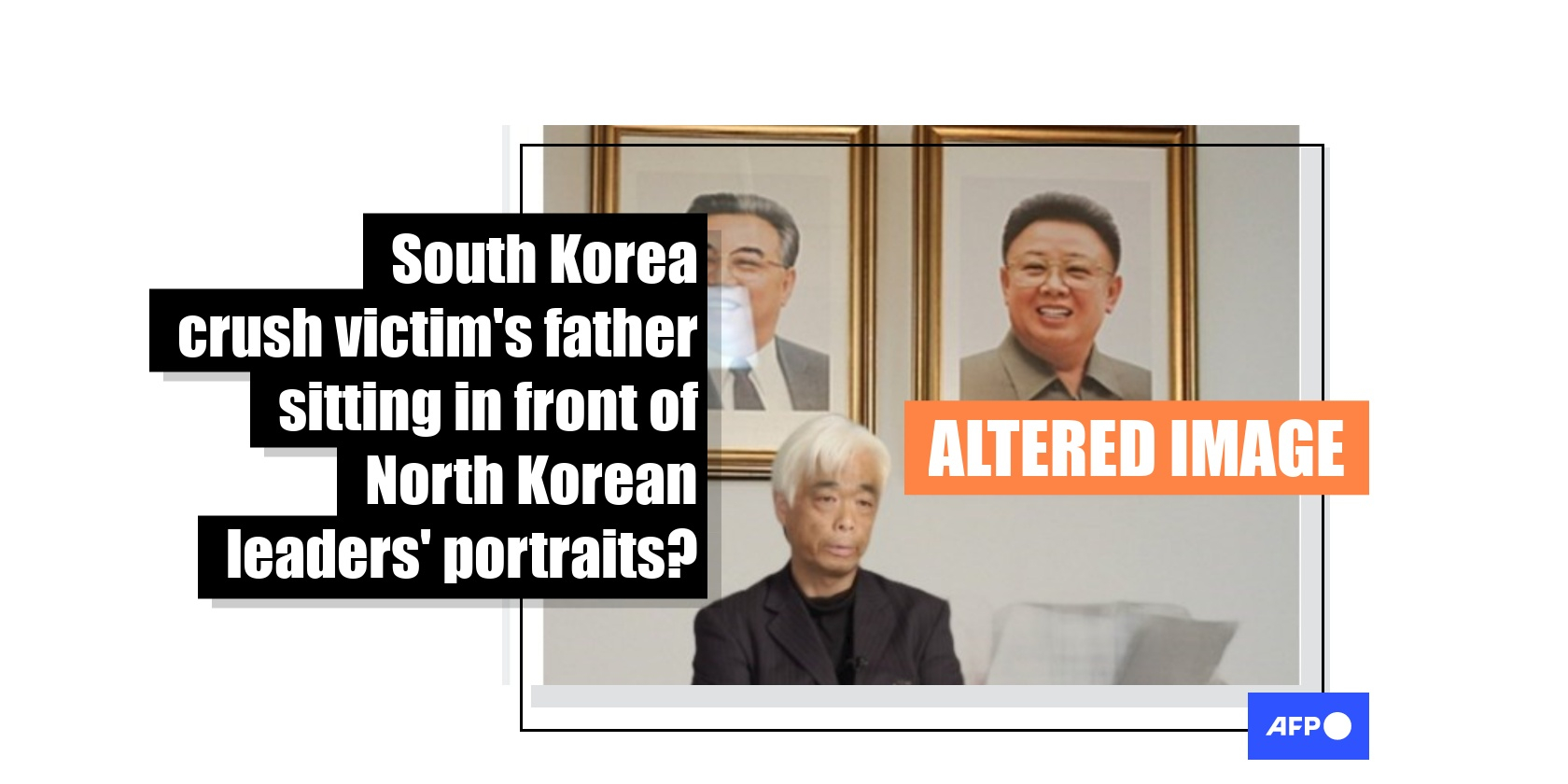 An image showing the South Korean father of a Halloween crowd crush victim sitting for an interview with a local media outlet has been doctored to include portraits of two former North Korean leaders on the wall behind him. The photo prompted mocking comments from social users, some of whom appeared to believe it was genuine. AFP found the image had been merged with a 2016 photo captured by the Associated Press news agency.

The image shows Lee Jong-chul, the leader of a group of family members of victims of a crowd crush in Seoul's Itaewon district on October 29, 2022. More than 150 were killed in the tragedy, most of them young people.

In the image, Lee appears to be sitting for an interview in front of framed portraits of North Korea's two former leaders -- Kim Il Sung (left) and Kim Jong Il (right). 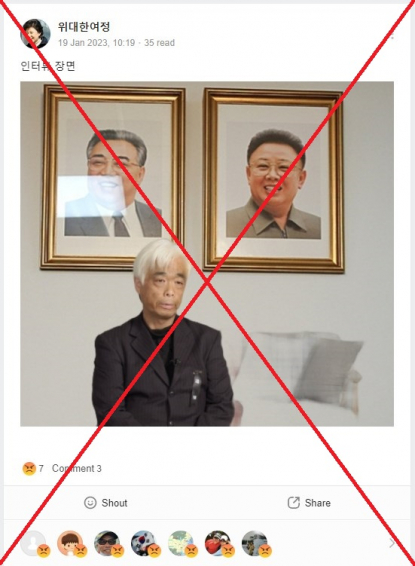 Screenshot of the misleading claim shared on Naver Band captured on January 19, 2023.

Bereaved family members of the Itaewon victims have demanded accountability from the South Korean government over what they claim was a botched response to the disaster.

But their activities have come under fire from some online users and far-right groups who suggest they are just seeking a larger payout or trying to subvert President Yoon Suk-yeol's administration, local media reported.

Some users commented on the posts to suggest the image was evidence Lee and other Itaewon families may be affiliated with the North Korean government.

"Has he gone mad, or was he always a Communist?," wrote one user.

"This man should be arrested and put in chains under the National Security Act," wrote another.

It may have originally been intended as satire after it was first posted on Ilbe, a far-right website known for sharing satirical and mocking content about politicians and figures prominently in the news.

The January 15 post included the tongue-in-cheek title, "A photo that doesn't look out of place."

A reverse image search on Google found that part of the doctored image showing Lee corresponds to a photo published in an interview with Lee Jong-chul by Newstapa, a South Korean investigative reporting organisation, on November 24, 2022.

The original photo published in the report shows Lee sitting in front of a multi-coloured sofa in a grey room without any portraits on the wall.

The photo's caption reads, "The father of Lee Ji-han, a victim of the Itaewon tragedy."

Below is a screenshot comparison of the doctored photo shared on Naver Band (left) and the original photo of Lee published by Newstapa (right):

In the interview, Lee talks about what he called the government's dishonesty and evasiveness in taking responsibility for the tragedy as well as the personal attacks levelled against victims' families by people on and offline.

The scene corresponding to the photo can be seen in the full YouTube version of the Newstapa interview with Lee Jong-chul at its 19-minute, 19-second mark.

A wider view of the room in which the interview was conducted can be seen in the video's seven-second mark, which shows there were no portraits hung on the wall behind the couch.

A reverse image search on Google found the image of Lee was merged with an Associated Press photo of an interview with a former North Korean foreign minister on April 23, 2016.

Below is a screenshot comparison of the doctored photo shared on Naver Band (left) and the original AP photo (right):

In his first interview with a Western news organisation, Ri spoke to AP about the reasons behind North Korea's pursuit of nuclear weapons.

Other AP photos from the interview can be seen here and here, showing both Ri and the portraits from slightly different angles.

The portraits can also be seen at the two-second mark in AP's YouTube video of the interview.