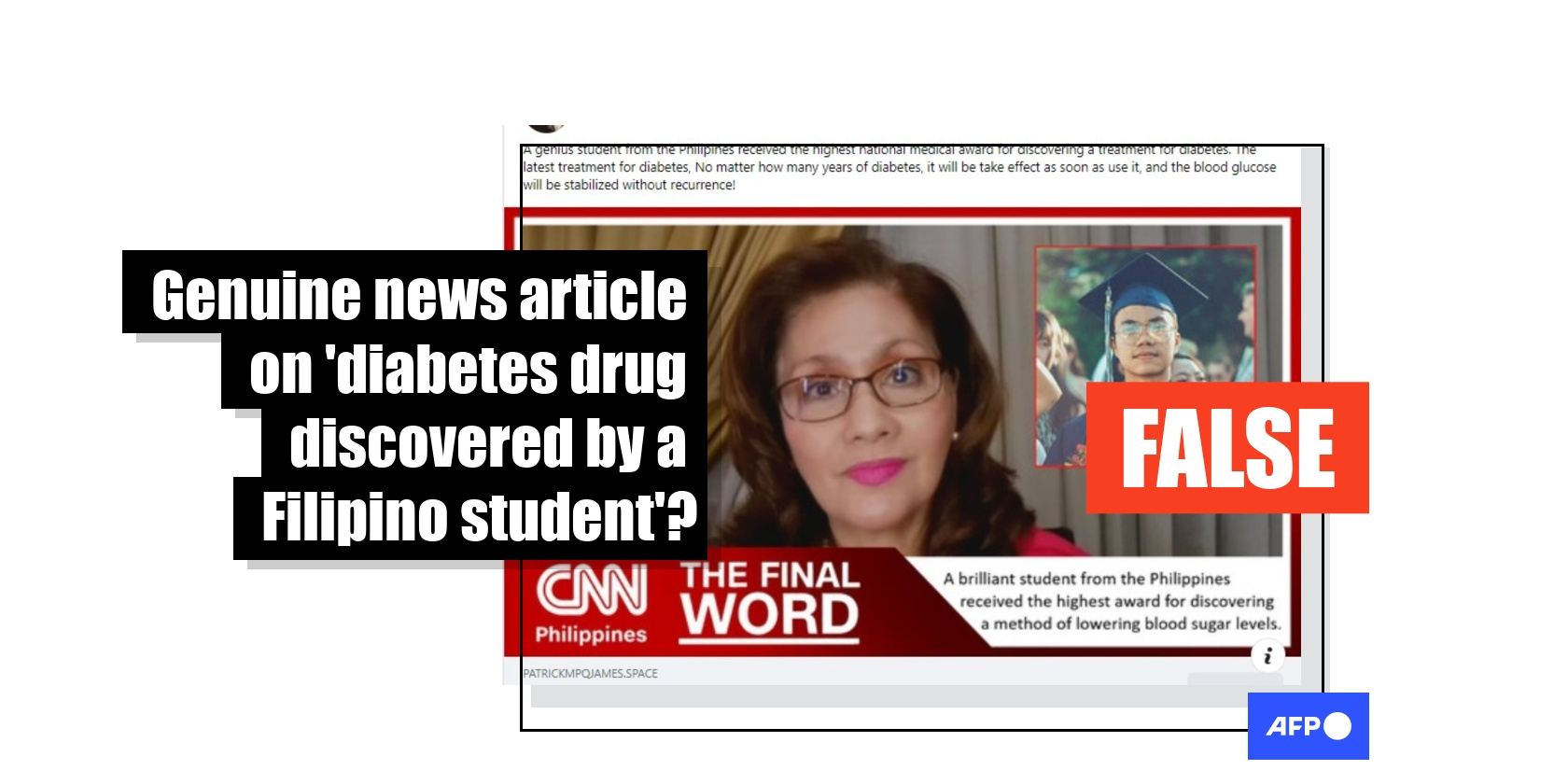 A fabricated CNN Philippines report repeatedly shared on Facebook claims a "prominent Filipino endocrinologist" has endorsed a treatment for diabetes discovered by a student in the country. But the doctor featured in the false posts is actually an eye specialist and told AFP she "never took part" in the research or promotion of any diabetes supplement. There is no evidence a student from the Philippines has discovered an effective diabetes treatment, while experts say the pills touted in the posts have not been proven to treat the disease.

A Facebook post from December 26, 2022 shows a screenshot of a phoney news report labelled with the logo of the CNN Philippines' evening news programme "The Final Word".

The post reads in part: "A genius student from the Philippines received the highest national medical award for discovering a treatment for diabetes.

"No matter how many years of diabetes, it will be take effect as soon as use it, and the blood glucose will be stabilized without recurrence!"

The post links to a page whose URL bears what appears to be a person's name. But the page shows a site with CNN Philippines' logo and supposed interviews with the student and Filipino eye doctor Minguita Padilla.

The page reads in part: "Dra. Minguita Padilla, a prominent specialist from the Philippines Association of Internal Medicine Specialists, a well-known and highly qualified endocrinologist, is involved as the project coordinator representing the Government."

Towards the end of the article, the purported treatment is identified as "Glucosoft" capsules and labelled as a "dietary supplement". 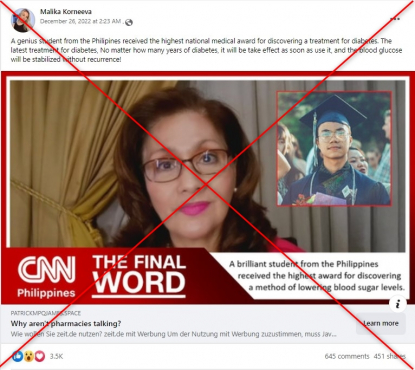 Similar posts were also shared on Facebook here, here and here, and websites here and here which featured another brand of purported diabetes capsules called "GlucoPRO".

Diabetes is a chronic illness where a patient has elevated levels of blood sugar -- also known as blood glucose.

Philippine government data shows it was the fourth leading cause of death in the country in 2022.

Comments suggest people may have believed the information in the post.

One wrote, "You are the gift of God for the sweet loving people (diabetic). Another breakthrough."

Another said, "Ok…Where can I buy that? I'm diabetic for a long period of time now."

In a statement sent to AFP on January 11, CNN Philippines said they are "in no way connected to the medicine brand which supposedly cures diabetes".

The official website of the media outlet is www.cnnphilippines.com.

Below is a screenshot comparison of the imposter site (left) and CNN Philippines' official website (right): 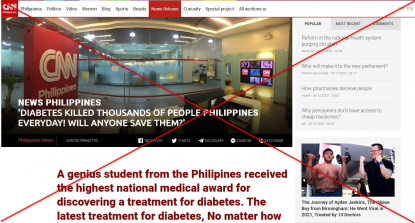 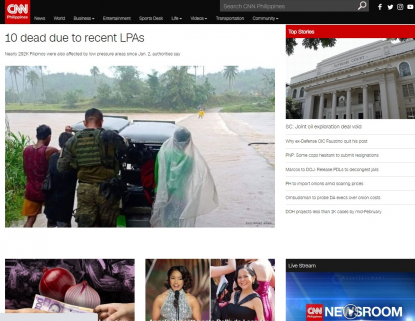 A reverse search of the image of the student who supposedly discovered the treatment found the photo was uploaded on stock image and footage website Pexels.com.

"I am not an endocrinologist, there is no medical organisation called the 'Philippine Association of Internal Medical Specialists', I never took part in the development of any supplement for diabetes, and I never gave any interview over CNN Philippines regarding the matter," she told AFP on January 3.

Keyword searches found Dr Padilla's screenshot in the fake report was taken from a CNN Philippines interview published on October 19, 2022, when she was a senate candidate.

Below is a screenshot comparison of the fabricated report (left) and the original interview (right): 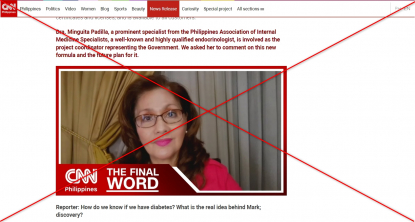 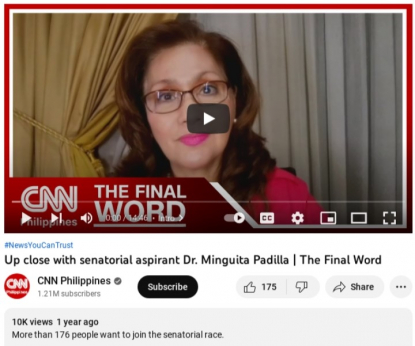 AFP has previously debunked similar posts touting a herbal supplement as treatment for diabetes. Doctors have said there is no scientific evidence to support the claim.

"That's the reason it's called a supplement because it has never undergone any randomised clinical trials that can prove its efficacy and safety," said Dr Mia Fojas, associate professor of biochemistry from the University of the Philippines College of Medicine.

Dr Princess Landicho-Kanapi, an endocrinologist from the Makati Medical Center hospital, advised patients to consult with their doctors before buying any purported drug they see online.

"There are actual medicines and other ways to control blood sugar, such as eating healthy and increasing one's physical activity."

Multiple keyword searches on the Philippine Food and Drug Administration's database have not found a registration for "Glucosoft" or GlucoPRO capsules. A product called "GLUCOPRO" is registered in the database as a "powder mix drink".

A spokesperson for Unilab, a pharmaceutical company based in the Philippines, told AFP that it manufactured the powdered drink GLUCOPRO but said it had no connection with the product promoted in the false posts.