A doctored photo of Russian President Vladimir Putin has been shared thousands of times in social media posts that falsely claim it shows him reading a book written by the ousted Pakistan prime minister Imran Khan. But the image has been digitally altered from a photo of Putin holding a book about the development and growth of Russia.

"The world reads (about) Imran Khan and we are very lucky that we have got a leader like Imran Khan. Thanks to Allah," reads the Urdu-language post shared here on Facebook on January 7, 2023.

It also shows a book on his desk that appears to be "Let There Be Justice: The Political Journey of Imran Khan," a biography of Khan written by B.J. Sadiq in 2017. 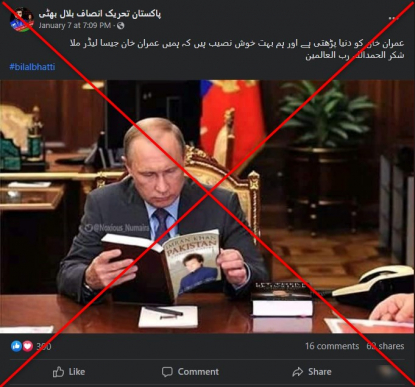 Former cricket star Khan was ousted as prime minister in April last year. He has since held rallies across Pakistan in a bid to drum up support for a snap election, claiming he was pushed out of power in a conspiracy orchestrated by the United States.

Shortly before he was ousted, Khan visited Putin at the Kremlin in Moscow following Russia's invasion of neighbouring Ukraine in February. He later defended the trip in a televised address as "beneficial for Pakistan in the future".

Comments from some Facebook users indicated they believed the photo was genuine.

"Imran Khan is a great leader," wrote one Facebook user.

However, a reverse image search on Google found the original photo of Putin shows him reading a different book.

Below is a screenshot comparison of the photo in the false posts (left) and the photo published on the Russian President's official website (right), with the book covers circled by AFP:

Screenshot comparison of the doctored photo (left) and the original image (right).

Screenshot comparison of the doctored photo (left) and the original image (right).

"Vladimir Putin met with President of the Russian Academy of Sciences (RAS) Vladimir Fortov and Director of the Federal Agency for Scientific Organisations (FASO) Mikhail Kotyukov," the post reads.

According to the post, Putin was looking at a book -- presented to him by Fortov -- on the development of Russian civilisation and the theory of population growth.

The post made no mention of Khan or his book.

Further investigation found the image may have been originally created as satire.

A keyword search for the text superimposed on the doctored image, "Noxious_Numaira", found a YouTube user whose account description reads: "Pakistani Political Memes".

The user, who has a corresponding Twitter account, often posts memes and doctored images and videos to promote Khan as seen here, here and here.

AFP previously debunked a video about Khan doctored by the same user.