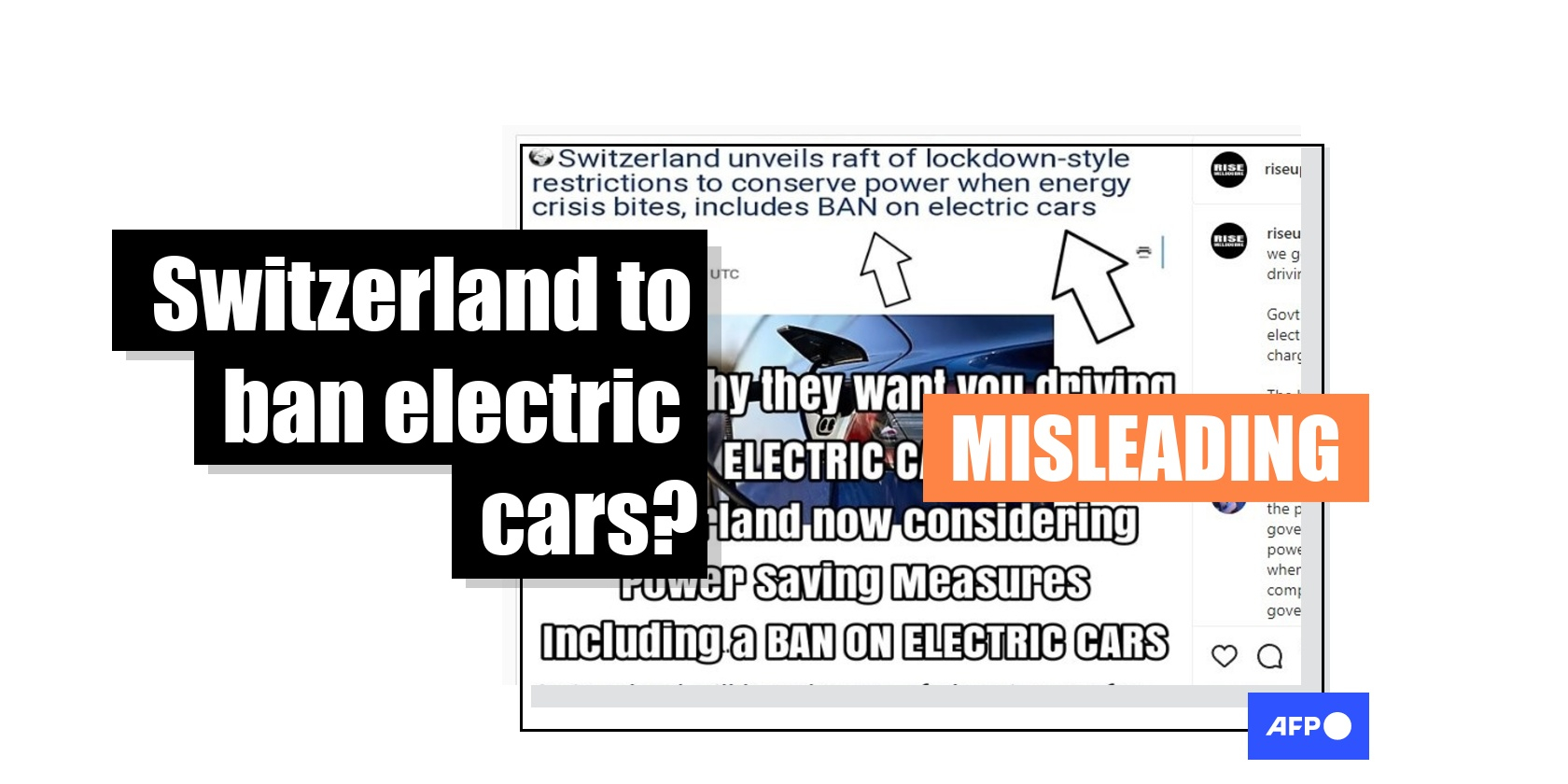 As European countries navigated an energy crunch triggered in part by Russia's invasion of Ukraine, social media users shared a misleading claim that Switzerland was considering a ban on electric cars as a power-saving measure. While Switzerland was looking at draft regulations for restricting the use of electric vehicles for non-essential travel at the time the posts circulated, it was not planning to ban them. A Swiss government spokesperson told AFP that, under the draft regulations, the restrictions would only be implemented if softer restrictions to conserve electricity proved ineffective.

"This is why they want you driving ELECTRIC CARS. Switzerland now considering power saving measures including a BAN ON ELECTRIC CARS," reads text superimposed on an image shared by an Australia-based user on Instagram here on December 3, 2022.

The image appears to be of an article by MailOnline, the website for the UK-based Daily Mail newspaper. Its headline reads, "Switzerland unveils raft of lockdown-style restrictions to conserve power when energy crisis bites, includes BAN on electric cars".

The article goes on to say: "Switzerland will ban the use of electric cars for 'non-essential' journeys if the country runs out of energy this winter, the government has announced." 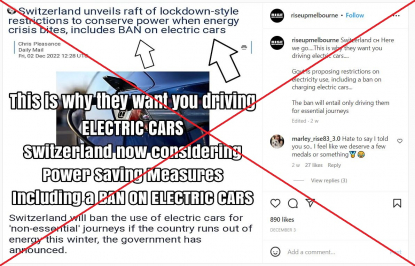 Comments on the posts suggested some users were misled by the claim.

"Just wait until they turn off free charging stations and you have to fill up on your own power…. And power prices soar with demand nobody apart from the 1 percent will be able to drive," reads one comment.

Another comment reads: "Imagine driving your car home, and they activate the stop mode. Now you are 14 miles from home in cold weather for the sake of saving electricity."

Far-right UK politician Nigel Farage shared a similar claim on Gettr, but appeared to have mixed up Switzerland with Sweden. The same mistake was made by users on Facebook and Twitter.

A spokesperson for the Swedish government told AFP in an email on December 18 that Sweden had not banned electric cars.

The Swiss federal council met on November 23 to discuss measures in the case of a severe electricity shortage, which were included in a set of draft regulations.

In response to the misleading posts, a spokesperson for the Swiss Federal Department of Economic Affairs told AFP that electric cars "are not banned in Switzerland, nor are they intended to be".

Markus Spöerndli said that according to the draft regulations, the restriction on the use of electric cars was only intended to be used in a worst-case scenario if voluntary appeals to save power or milder restrictions proved ineffective.

"A potential restriction on the use of private e-vehicles is currently included in a first draft of a preliminary ordinance as a possible measure in the event of a persistent electricity shortage, if, and only if, the shortage could not be remedied with milder measures taken in advance," Spöerndli said in an email on December 13.

There were 110,700 electric cars registered in Switzerland in 2022, equivalent to 2.3 percent of all passenger cars, according to the country's Federal Statistics Bureau.

Christoph Wolnik, a spokesperson for auto-schweiz, an association of car importers, also told AFP on December 21 that the Swiss government planned to forbid the use of private electric cars during an electricity shortage.

He said there would be exceptions for people going to work or to doctors' appointments and pointed out that wellness centres at hotels would still be able to operate for seven hours a day.

"We as the Association of Swiss Car Importers do not really agree with this idea and have reacted strongly. We now very much hope that the government will withdraw the proposal and not put it into practice," he said in an email.

Spöerndli, the spokesperson for the Swiss Federal Department of Economic Affairs, said the draft regulations were being revised and were expected to be passed in the first two months of 2023.

He reiterated that the restriction on the use of electric cars was only a "possible measure in the event of a persistent electricity shortage".